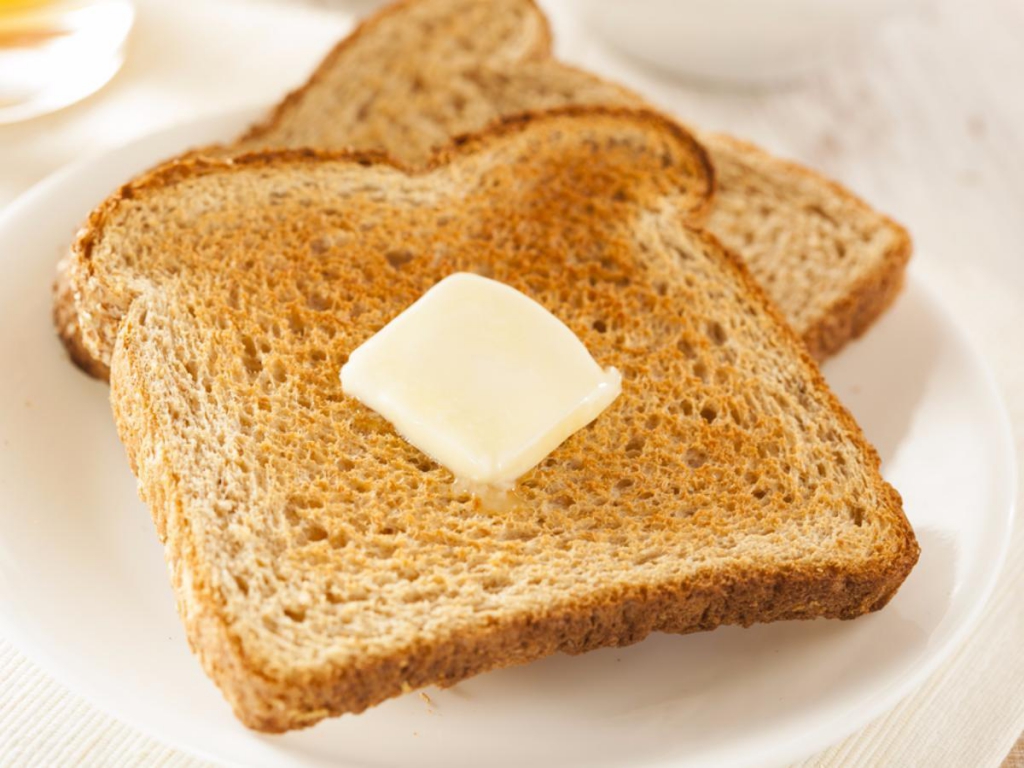 So, yesterday morning, I went for a short run (redundant, really, since “short” is the only kind of run I ever seem to go for, if at all), and returned home feeling all fit and spry — and hungry. This last part is always a challenge, because the extent of my culinary abilities is limited to boiling and toasting — or so I thought. Turns out I can remove “toasting” from my cooking résumé.

Already, we’re off to a bad start, because, as anyone with a few brain cells knows, it takes considerably longer to boil a couple of eggs than it does to toast a couple of pieces of bread — a fact that, had I not been high on endorphins and preoccupied with listening to Howard Stern, I probably would have considered before embarking on my culinary journey.

So the toaster oven goes “ding,” and the toast, I must say, was almost the perfect shade of golden brown for which I had hoped … but the eggs still had a ways to go. I let them boil for a few more minutes, then turned the toaster oven back on, with the intention of briefly reheating my lovely, golden-brown toast so that the butter I planned to spread upon it would melt accordingly, and — “Hey! That would create the perfect surface on which to sprinkle some sugar and cinnamon! I think I’ll mix a bit of those two seasonings together right now!”

I grabbed the sugar bowl. I grabbed the cinnamon container. I grabbed a small receptacle into which I poured and mixed the two. “Hmmm. Looks like it needs a little more cinnamon.” I added some. I mixed the concoction some more. “Looks good. I’ll just place that down right here and get my — TOAST! HOLY MACKEREL! NOW THAT’S A FIRE!!!”

Yes, one of my two pieces of toast was completely engulfed in flames. Like, it appeared as though the entire slice had been dipped in JP-4 jet fuel. Its twin brother apparently was flame-retardant, which a small part of my brain found fascinating, but I had no time for such musings, because, seriously, those flames were beginning to lick out of the top of the toaster-oven door, and were dangerously close to all of those random pieces of paper and photos hanging from the side of the refrigerator, against which the toaster oven had, until yesterday, lived.

Because I was unable to unplug the oven, I also was unable to douse the flames with water. I briefly attempted to blow out the flames with a blast from my super breath, but it quickly became evident that this method was going to accomplish nothing more than to increase the likelihood of my home burning down.

And so I grabbed the fire extinguisher and blasted that flaming toast back to the depths of the fiery Hell from whence it came.

The events of the past four paragraphs occurred over the course of about nine seconds.

The most noticeable side effect of setting a piece of wheat toast on fire in your home and then blasting it with a fire extinguisher is the positively voluminous amount of smoke that billows throughout the house, thus necessitating the opening of all of the windows and doors — which, really, is perfect on a brisk, February morning. 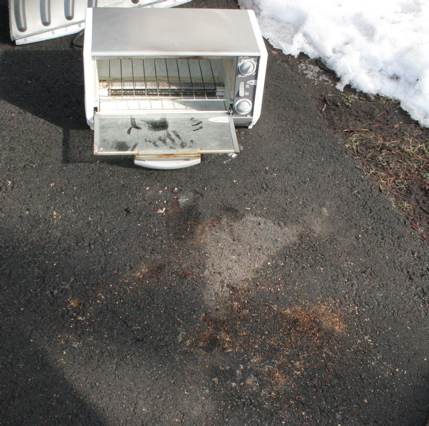 The residue on the glass door is what came out of the fire extinguisher; the brown-and-black dust on the pavement is the toast, which Zan and Jayna, upon returning home shortly after the incident occurred, promptly removed from the oven and pulverized.

Stick around; there’ll be more buffoonery to come, I assure you.