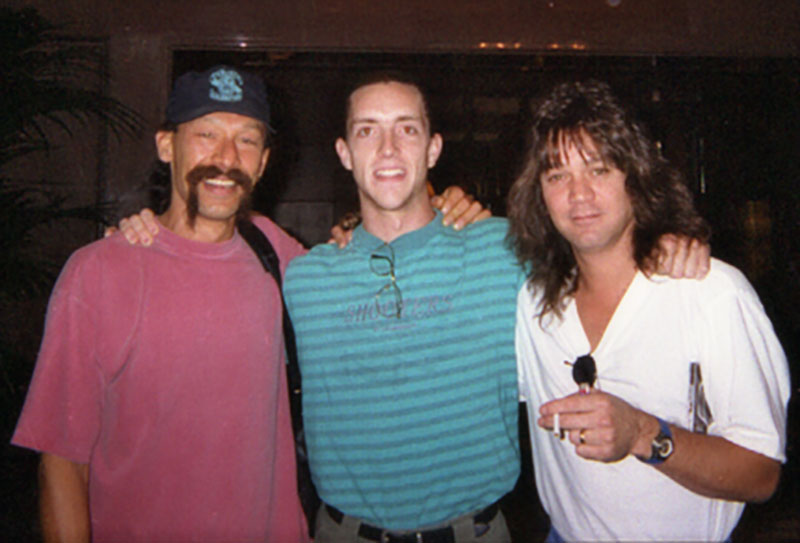 On the first day of the first class of my freshman year in college, my College Writing 101 professor instructed us to go home that weekend and write a paper about the person whom we would most like to meet if given the chance.

And I could have bullshitted him. I could have written about wanting to meet JFK or Martin Luther King Jr. or some other revered, sociopolitical icon … but I wasn’t an 18-year-old freshman just out of high school; I was a 22-year-old freshman who had recently spent nearly four years in the Army, and my inclination to sling bullshit in order to impress a college professor was, by that point, quite nonexistent. And as I looked down at the blank notebook in front of me that weekend, I saw stretching out before me four long years of higher education … and I knew that the only way I was going to make it to the finish line was to figure out how to marry my own personal interests to my academic pursuits.

So I wrote the “I want to meet Eddie Van Halen” paper.

The following week, just before handing back to the class the graded papers, the professor announced that, for the first time in 17 years, he had given out an “A+” on that first writing assignment. He then proceeded to read aloud to the class my “I want to meet Eddie Van Halen” paper.

And that would be a cool enough story in and of itself — if not for the fact that I eventually did meet Eddie Van Halen … a number of times … and, believe it or not (and you’ll believe it if you keep reading), hung out with the entire band.

But let’s not jump ahead, because my intention here is not simply to say, “Hey, look at me! I met Van Halen! I’m cool!” I mean, that’s definitely part of my intention (because what the hell good is hanging out with Van Halen if you can’t brag about it a little, right?) — but it’s not the sum total of my intention. The larger goal is to explain what a bittersweet thing it has been to become inextricably linked to a band that, for the past 20-plus years, has meant more to me than any other musical act — and a band that, unfortunately, has also spent almost half of that time finding new and exciting and laughably ridiculous ways to destroy itself and its legacy.

My friend Bob introduced me to Van Halen’s music when I was about 12. He would snatch the tapes out of his brother’s 1979 Monte Carlo, and we would crank them on his mother’s stereo. I had never heard anything that moved me the way that Eddie Van Halen’s music and otherworldly guitar playing did, and I still haven’t.

I fell completely in love with the group.

When David Lee Roth jumped ship in 1985, I was bummed, but I only ended up becoming even more hooked when Sammy Hagar replaced him. In every interview that I read, every video I watched, every television appearance the group made, and every live performance I saw, I was blown away by how much fun those four guys had together, and how much they clearly loved being with each other. It was genuine, and it really struck a chord in me.

I was raised a Catholic, but I never bought into that fairytale, and I certainly never experienced anything within organized religion that caused me to believe in a higher power the way that Van Halen’s music did. In essence, Van Halen was my religion. (Hey, it’s certainly no more outrageous than believing in a four-armed, elephant-headed deity; an evil galactic warlord named Xenu; or a guy who came back from the dead.)

Ed has always said that he doesn’t know where the music he makes comes from, and that he feels like he is simply a conduit who channels it from some other source. I think he’s probably right about that.

When I was 23, I stalked — er, met — the band for the first time. It was, quite literally, a dream come true. All of the guys were incredibly cool to me, and I am still riding the high from that encounter. 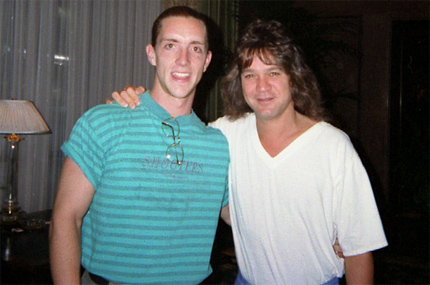 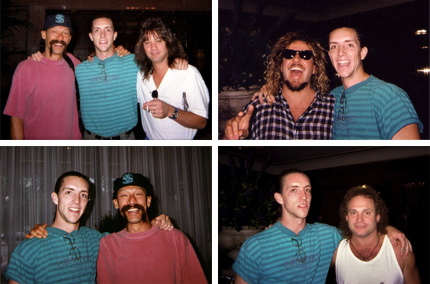 Several years later, I parlayed my way into a full-time gig as the managing editor and art director of a magazine that placed me in contact with the band. I got to spend a day with the group at Eddie’s home studio, and had all-access passes for Van Halen’s 1998 world tour. 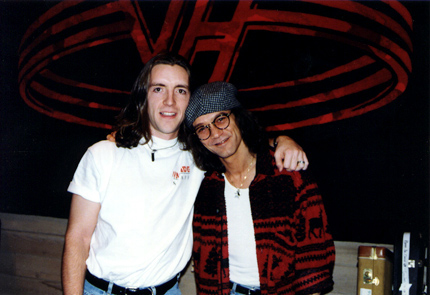 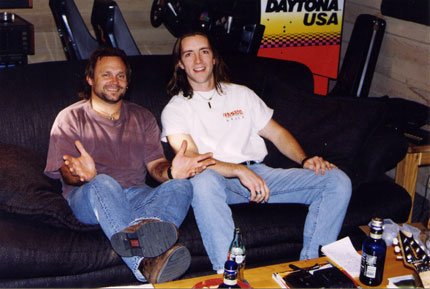 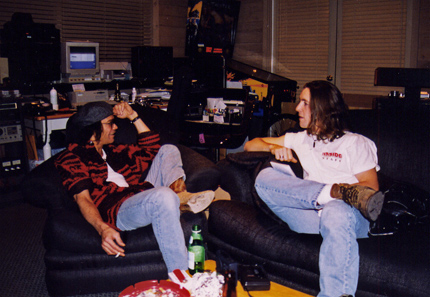 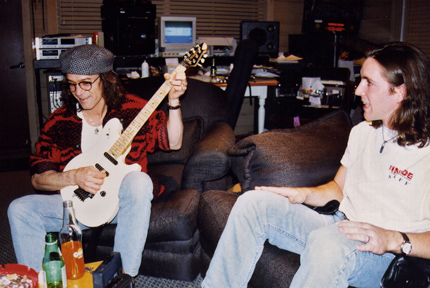 Now, if I may, please allow me to pause here for a moment so that I can again soak up the fact that the picture directly above this paragraph shows me and Eddie Van Halen hanging out in the lounge at his home studio (a.k.a. 5150), and that he is not only seated beside me, but he is seated beside me while playing a guitar. Holy fuck, people.

Also, please allow me to add that I look lobotomized in that last picture because I had mentioned to Edward earlier in our conversation that I played the drums, and he, just before the picture was snapped, asked me to keep time for him by tapping my foot and slapping out a beat on my thighs. What I actually ended up doing didn’t resemble drumming so much as it did a mild seizure, and I basically embarrassed myself, but, be that as it may, I, for a few brief seconds, was essentially jamming with Eddie Van Halen, and did I mention holy fuck, people?

The bummer was that all of this took place after Sammy and the group had parted on bad terms in 1996. To this day, that split is a bigger heartbreak to me than any I suffered at the hands of a woman — and I had some women who got downright medieval on my ass.

I know, I know. It’s ridiculous. Believe me, I wish I hadn’t become so invested in a band that, over the past 13-or-so years, has gone from being one of the most revered and influential rock bands of all time to, at best, a cautionary tale and, at worst, a punchline. But, through no choice of my own, I believed in that band, in the connection those four guys had to each other, in the music they made, and in the way that the four of them being together resulted in a magical fifth element, more than I believed in anything else. That’s just the way it worked out. Some people find Jesus; I found Van Halen.

So you can imagine how completely stoked I was a couple of years ago when the band announced that it had reunited and, for the first time since the mid-’90s, was going out on tour with Sammy at the mic. During one of the first concerts on that reunion run, I was lucky enough to hang out backstage briefly with Michael and Sammy during Alex Van Halen’s drum solo. (And, yes, I know I’m showing off and name-dropping, but seriously, y’all: what the hell good is hanging out with Van Halen if you can’t brag about it a little bit, am I right?) Mike shared his bottle of Jack Daniels with me, Sammy shared his bottle of Cabo Wabo tequila with me, and I got to tell them how much it meant to me that they were all back together.

Several months before news of the reunion surfaced, Sammy announced that he and Eddie had mended fences, and that all four guys were on friendly terms again. That would have been enough for me. Listening to Van Halen’s music had once been a surefire way to make me feel nothing but happy and completely juiced about life, but during the years when Sam was gone and the group was floundering, listening to VH just made me bum out that the guys who had made that amazing music together weren’t even on speaking terms. Knowing that they were friends again put that to rest.

Unfortunately, by the end of the 2004 tour, Ed and Sam had again clashed, and the reunion ended on a sour note. As I understand it, Edward is the one band member most responsible for the group’s return to perpetual limbo. It’s a shame, and it’s a waste, and when I think about all of the music these guys could have recorded and released over the past 10 years if they had worked things out, it makes my head pop off and fly around the room like an unknotted balloon.

Be that as it may, the fact remains that Van Halen has had more of an impact on me than most other things in my life, and will always occupy a special and exclusive spot in my heart and soul.