Nine years old, Gene! And a boy! (Even back then, I was wise enough to advise you of both my age and gender, because I sensed what an incorrigible womanizer you were, and I didn’t want you to waste your time seeking me out when I turned 18 … or 16, even. Like that Christine girl you were all wound up about.)

If that doesn’t jog your memory, maybe this will:

Halloween night, 1998, Dodger Stadium in Los Angeles. You guys were a little over halfway through the set when the lights dimmed and that rumbling bass of yours filled the darkness.

“‘GOD OF THUNDER’!” I screamed like a lunatic. (“God of Thunder” is your signature song, Gene. Yes, I’m well aware that you already know this, but I’m clarifying it here on the off chance that someone other than you might be reading this letter. You never know.)

And then, instead of launching into “God of Thunder,” you played a new song called “Within” … the opening to which, when one is located in the cheap seats at Dodger Stadium, sounds a lot like “God of Thunder” … to me, anyway … but not, apparently, to anyone else seated around me, whose eardrums I had ruptured from screaming at the top of my lungs the wrong song title, over and over again. So that was sort of embarrassing.

But I didn’t care about embarrassing myself, Gene. Not much, anyway. Mostly because I knew I’d never see any of those people again, but partly because you had taught me from an early age to not give a fuck what anyone else thinks. You were like the honey badger before honey badgers were cool.

You might not have heard me above the rest of the Dodger Stadium crowd, though, so perhaps this will ring a bell:

March 11, 2000. Opening night of KISS’s so-called “Farewell Tour” in Phoenix, Arizona. There I was, leaning against the front edge of your side of the stage. What luck! I mean, listen, it was cool seeing Ace, Paul and Peter … but the dude I was most excited about photographing was you! Gene Simmons! Of KISS! 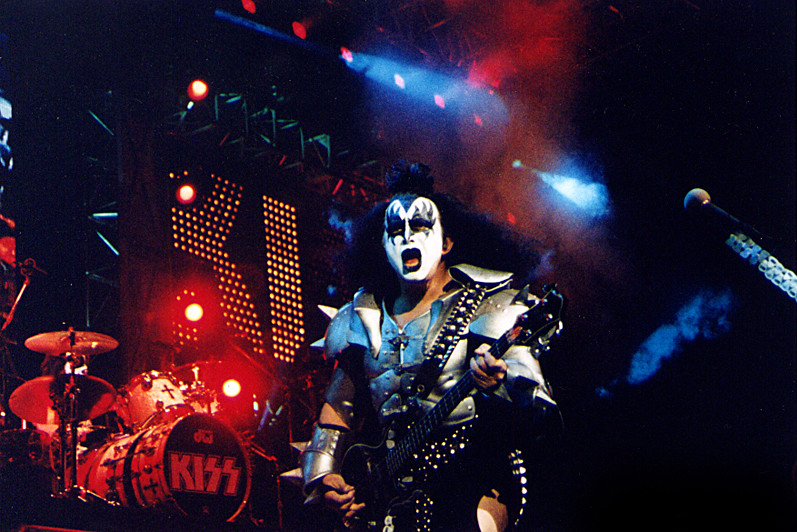 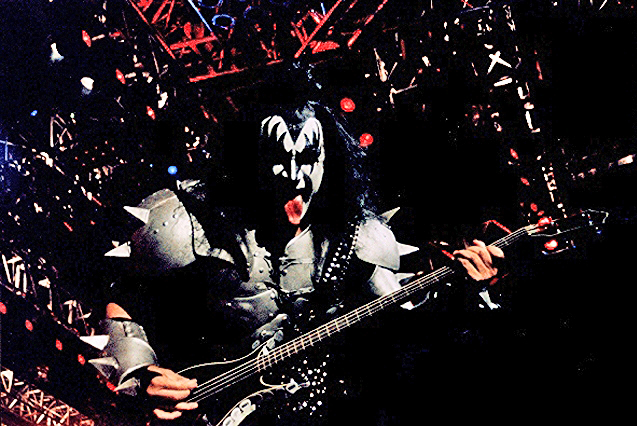 I tried not to read too much into it, Gene, but when you came right over to me and stuck out that famous tongue, I felt like we had a moment. Like we bonded. I felt like we were bros, dude.

Heck, I even interviewed you on the phone once. I think it was around 2003. No doubt, that special day was as memorable for you as it was for me. (You were sitting on the toilet at the time. At least, that’s what you told me. I was touched that you immediately felt so connected with me that you would share such a personal detail. I mean, sure, it was crass as hell and, frankly, downright off-putting, but still … another example of our special bond.)

So imagine my sorrow when I recently visited your Twitter page to see how my bro was doing … and found this: 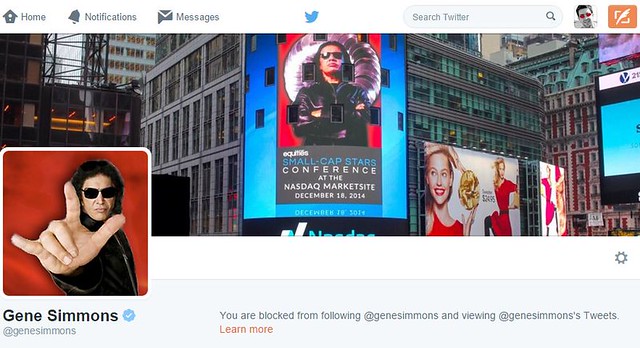 “Wait a minute,” I thought, squinting for a closer look. “Does that really say what I think it says?”

You blocked me? You, Gene Simmons … my bro … my childhood idol … blocked me from following you and reading your tweets? … thafuck Gene?

I was dismayed. What could I, a faithful KISS fan of almost four decades, possibly have done to offend the God of Thunder so badly that you had gone and done something as petty as to block me on Twitter?

Think, Jon, think. Was it that Gene Simmons Easter egg I made a couple of years back? 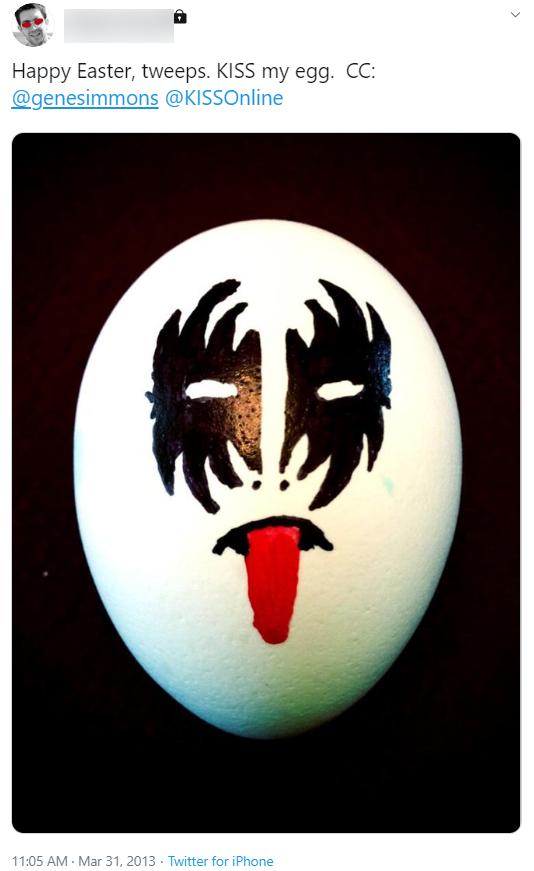 No, that couldn’t be it. Hmmmmm.

I continued to scour my Twitter history … and then I found it. August of last year. The same week during which comedy legend Robin Williams took his own life and a police officer shot and killed Michael Brown in Ferguson. While trying to distract myself from those awful headlines, I came across a picture of you and KISS bandmate Paul Stanley holding an outdoor press conference to discuss your indoor-arena football team, L.A. KISS. And then, in a noble attempt to heal with laughter the psychic wounds our weary nation was nursing, I made a joke at your expense: 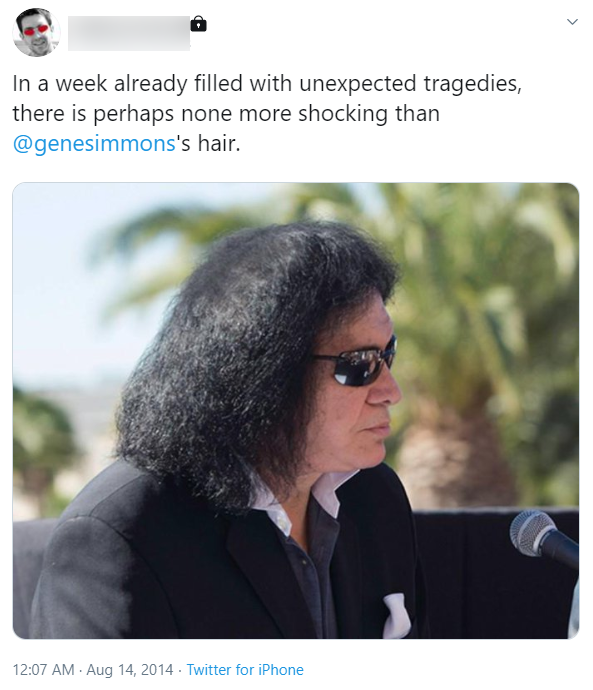 Really, Gene? After all the shit people have said and written about you, you’ve dishonorably discharged a lifelong member of the KISS Army over a harmless hair joke?

Look, I get it: no one likes to be made fun of. But, in my defense: please look at your hair.

Also, to be fair: I didn’t make you go out in public looking like that; you did so of your own free will, knowing full well that people would be photographing you.

Actually, Gene, I think I’ve figured out what happened: You, being the good-humored, self-effacing guy we all know you to be, laughed so heartily at my little hair joke that your vision became blurred from laughter-induced tears … so much so, in fact, that, when you attempted to “Like” my tweet and then “Follow” me on Twitter, you inadvertently hit the “Block” button.

Yes, I’m sure this is all just one big misunderstanding.

I’m glad we’ve sorted this out, and I look forward to you unblocking me soon so that we can get back to being bros.