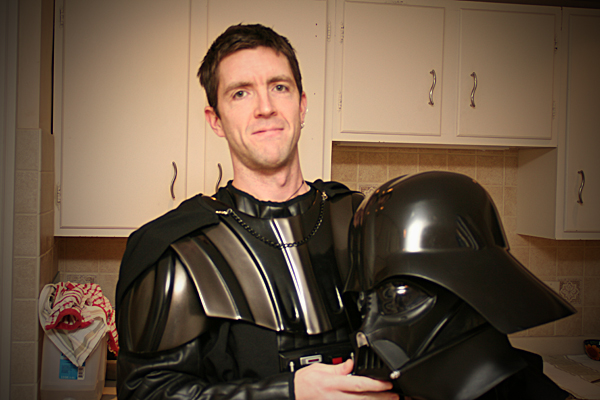 OK, so here’s the story with this nonsense:

A few weeks ago, my wife and I took the kids to the comic-book store. While there, my wife, who is on the school council at our son’s elementary school, asked the owner if he’d be willing to sponsor a school fundraiser by providing for the event one of the costumed characters that often appear at his store. The owner said he didn’t have anyone specific he could send, but he’d be willing to loan out the store’s $800 Darth Vader costume.

Well, as we all know by now, no one loves to get himself into ridiculous situations more than me, so I, of course, said, “Yeah, I’ll do it.”

And so yesterday arrived, and suddenly it was time for me to actually dress up in the damn thing … and, alright, I’ll admit it: as a “Star Wars” geek from way back, part of me was kind of excited about putting on that sweet-ass costume … but a much, much bigger part of me was completely skeeved out, because the costume smelled like it just came off of a recently exhumed corpse that had been slow-poached in Febreze bullion.

But, hey, I know how to take one for the team, so I strapped that bad boy on. 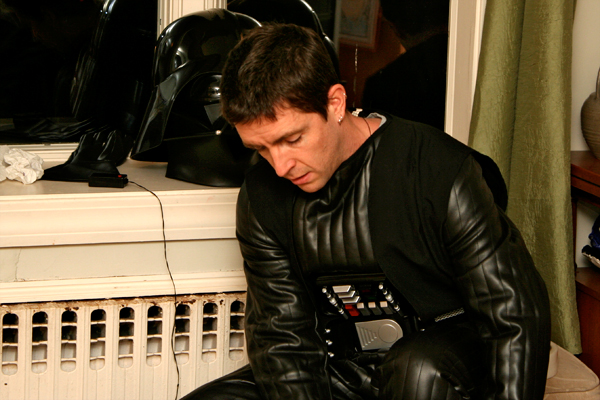 Suiting up took almost a half hour, and that didn’t include the two-piece helmet, which I carried to the gig, as my priority was to avoid for as long as possible the stench wafting from its padded innards.

Once we arrived at the location, my wife provided me with the container of Vicks VapoRub that I’d requested, as I’d planned to employ the old homicide-squad trick of placing beneath each of my nostrils a dollop of mentholated goodness … which I did … but seeing as how I’m a big whimp whose skin is as sensitive as that of an allergy-ridden albino infant, the VapoRub quickly created a burning sensation, so instead of mentholated goodness, it was l’odeur des swamp-ass for me.

The fundraiser worked like this: a local restaurant blocked off a couple of hours during which a portion of its profits would be earmarked for the school (or something like that; I’m not a “details” guy; I’m a “dress up in an asstastically stinky costume” guy). The local restaurant originally was supposed to be a pizza joint, but the pizza-joint people apparently turned out to be pains in the asses, so a late-game switch was made to McDonald’s … because nothing says “we’re helping little kids” quite like pumping them full of frightfully awful, nutritionally bankrupt fast food, am I right?

So here’s the thing about showing up at a suburban-Boston-area McDonald’s at 5 p.m. on a Tuesday night in early November dressed in an authentic movie-replica Darth Vader costume: AWK-WARD.

For starters, hardly any families from the school were there when we arrived, so I was pretty much just hanging around with my wife and kids while the other patrons were all looking at me like “…thafuk?” In other words, I felt like a bit of a douche. Douche Vader, if you will. Mostly, I was just hoping that the teenagers behind the counter weren’t thinking up ways to mess with me.

Fashion tip: an insulated, quilt-like, black-pleather bodysuit does not breathe quite as nicely as Egyptian cotton … and adding to your ensemble a heavy black cape, black snow boots, black leather gloves, black plastic-and-leather leg guards, a large black codpiece, several battery-operated light-up control-panel doohickeys, and a small steamer trunk disguised as a helmet does nothing to help matters.

It soon became clear that my only chance of survival was to station myself outside in the playground area.

Eventually, quite a few families showed up … and, fortunately, the kids were all pretty stoked about meeting Darth Vader. 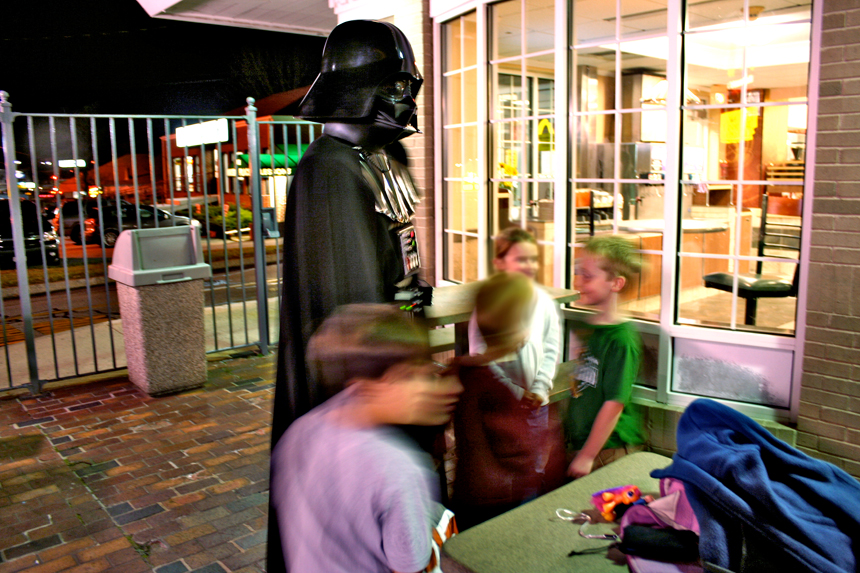 Unfortunately, Darth Vader could hardly see any of them, because the sauna-like conditions inside the costume quickly resulted in the clear-plastic-covered eye holes fogging over.

So there I was, broiling to death inside a Darth Vader costume. A lesser man would have caved in, fled the scene, removed the mask and gulped down lungfuls of fresh, breathable air. But not me. No, if there’s one thing that enduring Army basic training in Alabama in the middle of July and subsequently spending three years stationed in the Mojave Desert has made me capable of withstanding, it is being overdressed in extreme heat. Yes, that’s right: My extensive military training and background afforded me the physical and mental prowess required to wear a sadomasochistic science-fiction costume to McDonald’s. Happy Veterans Day, America! Thank you for your tax dollars!

Finally, my two-hour ordeal came to a close … although I still kept the mask on for the entire drive home … both because one of the mothers begged me to make sure her child didn’t see me take it off for fear it might scar him for life to discover Darth Vader was really just some regular dude dressing up for his kid’s fundraiser, and also because I figured I might as well get some decent pictures at home, indoors, where the lighting was much better.

Sadly, my staff photographer accidentally switched the camera from “Auto Focus” to “Manual Focus” without realizing she had done so … and so, instead of some epic shots of Daddy Vader and Zan Skywalker engaged in a deadly lightsaber battle, we have this blurry batch of shit: 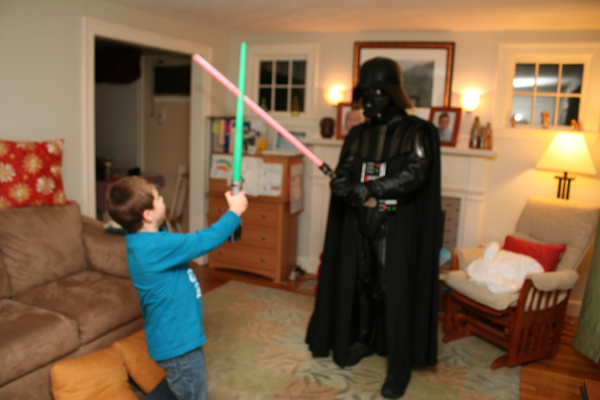 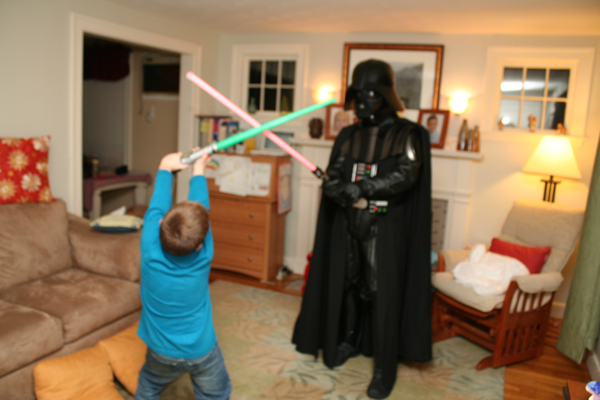 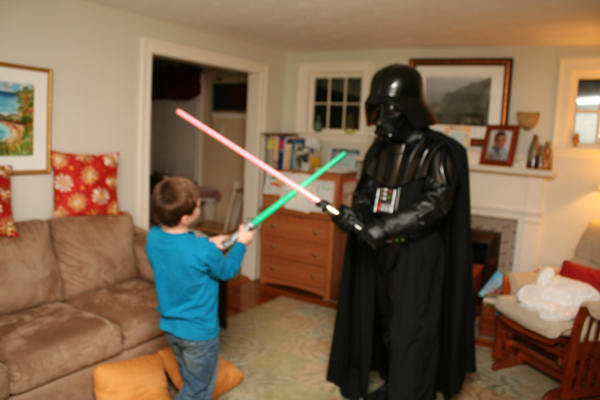 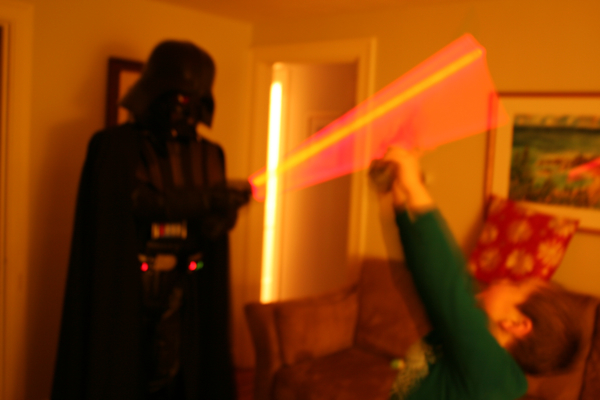 Also not to be missed is this blurry shot of Daddy Vader and daughter, the latter of whom felt compelled to quickly throw on her Snow White costume. 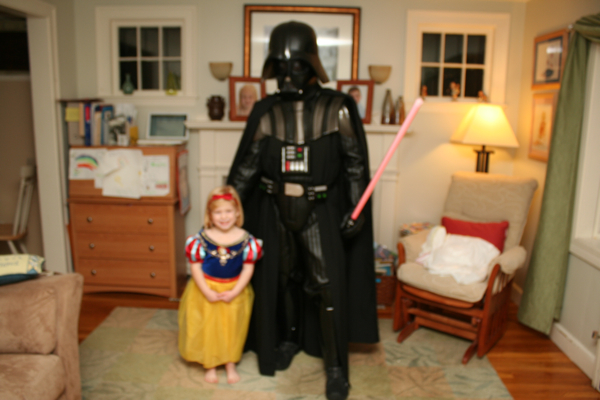 This would have been a great one, too: 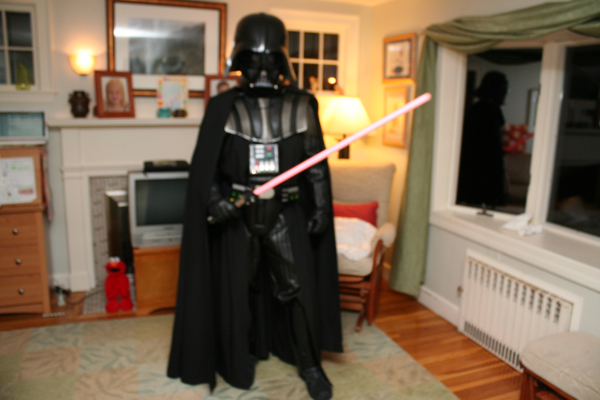 Oh well, at least we can plan on getting some better shots the next time I dress up in the suit … which should happen roughly never again.

When I finally stripped off the costume, Zan looked at my soaking-wet gray running shirt (which I wore along with a pair of spandex running pants, because there was no way in hell my flesh was going to touch the inside of that thing), he was all, “Whoah! I can’t believe how sweaty you are! Why did you do that, Daddy?”

“Dress up in that costume for two hours!”

“Why did I do it?” I replied, somewhat maniacally. “I did it for you! For your school! Pretty awesome, huh? Aren’t I a great guy? What a lucky boy you are to have a Daddy like me, eh? Now come here; I’m gonna hug you just like this!”

He wasn’t interested in hugging my sweaty, stench-covered self … but I’m hopeful that, when he reads this someday, he’ll be appreciative of the crazy shit I did in order to be the Cool Dad.