There are so many things wrong with this photo (not the least of which is the fact that I was standing in the bathroom at midnight taking a picture of myself in the mirror), or at least why this photo came to be, that I hardly know where to begin.

Every night before I go to bed, I hoof it upstairs and carry the kids to the bathroom in their sleep so that we can avoid any bed-wetting mishaps (and, boy-oh-boy, have there been some spectacular bed-wetting mishaps over the years). On some of those nights, I bring upstairs with me the children’s recently laundered clothing, which my wife often leaves folded on the stairs. Carrying it up is the least I can do, since she usually is the one who humps it all down to the river, bangs it against the rocks, wrings it out, hangs it to dry, gathers it all up, and folds it. (Love you, honey!)

Normally, I place my son’s folded laundry on the floor to the side of his dresser, from where my wife can then, on the following morning, put it in the proper drawers. (I leave this for her because I, after all, was the one who carried it all the way up the 10-or-so miniature steps that lead to our Lilliputian-sized second floor.)

Last night, however, the area where I usually place my son’s clothes was occupied by the front end of a fully assembled tent thing that looks like a rocket ship and basically takes up the same square footage as the actual Space Shuttle. Thus, there was a limited amount of space right in front of the dresser, which is where I chose to instead place the clothes. Unbeknownst to me, however — and not immediately apparent, because the lights were out, and the room was dark, and my vision had not yet adjusted to the darkness — someone had, earlier int he day, placed atop the light-colored dresser a piece of relatively darker-colored construction paper that just happened to be positioned directly in front of me, and which, in the dark, obscured the front edge of said dresser. (Yes, I’m making excuses for what is about to happen.) So imagine my surprise, then, when I quickly bent forward to place the clothing in an unfamiliar location (more excuses) and suddenly felt my head slam into the construction-paper-obscured (rehashed excuse) edge of the dresser.

Because I often, at moments like this, turn into a drama queen, I hit the deck with both hands clamped over the site of the injury and lay there waiting for the angels to claim me. After a moment or two, however, the pain subsided, so I removed my hands and rubbed the spot with my fingers, at which point I felt what seemed to be not merely a bump, but an actual gash in my forehead. Yes, I had slammed my head into the dresser with enough force to cause my skin to separate upon impact.

To the bathroom I went to wash the blood off my fingers and examine the damage.

Twice during my childhood, I split my forehead open … and if you’ve never had a head wound before, let me tell you from experience that they bleed like a sonovabitch; on both occasions, I was covered in red, and the wound required stitches. Thankfully, last night’s injury was less catastrophic, but to get the bleeding to stop, I had to press a wad of tissues against the cut with a great deal of force for a fairly lengthy time.

And it was during my wait for the clotting to kick in that I realized that this whole blogging thing is a form of mental illness, because, instead of just thinking “Jesus Christ, what a spectacularly moronic way to split my head open,” (which, admittedly, was the predominant train of thought) and “Holy shit, I’m glad that wasn’t an inch lower, or I’d have an eyeful of broken glass,” I quickly found myself also thinking (perhaps even with a small bit of joy?), “Well, at least I can write a blog entry about this!”

My wife woke up in bed this morning next to a 38-year-old man wearing a “Hello Kitty” Band-Aid on his forehead. 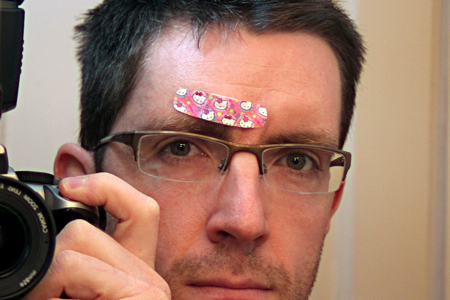 [Memo to self: Buy some grown-up Band-Aids.]