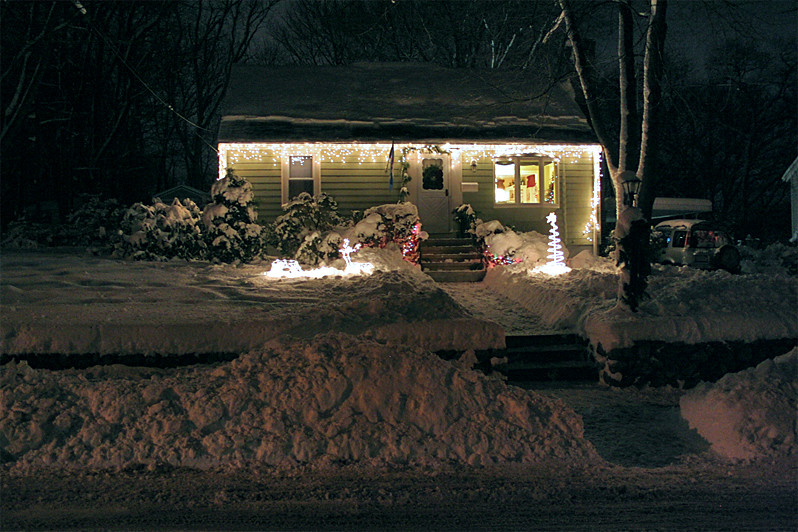 It wasn’t that I thought placing the ladder’s feet on the cement-and-flagstone walkway was necessarily a good idea … it’s just that that’s where I needed it to be in order to properly secure the Christmas lights to the gutter above the front door. I already had tried standing on the threshold of the doorway, but I couldn’t quite reach the gutter from there. A stepladder probably would have been the way to go, but it was getting darker and colder and I already had spent more time than I could afford trying to string up all of this holiday cheer, so fuck it, what’s the worst that could happen?

I should note that the item to which I am referring as a “ladder” more accurately would best be described as a “piece of a ladder.” It actually is the lower half of what, in its original form, was a two-piece aluminum ladder, the missing upper section of which most likely had mounted on the top ends of its rails some sort of rubber guards that would protect the surface against which the ladder would be placed. I also imagine that an added and extremely relevant bonus of placing those theoretical rubber guards against the surface of the house would be their ability to help keep the ladder in place. I wouldn’t know for sure, however, since the top half of my ladder is non-existent.

Seeing as we had just gotten the house painted a few months ago, I was loath to place the sharp, aluminum ends of my piece of ladder against the freshly painted wood. My hurried and improvised solution was to wrap around the top ends of the ladder a pair of hand towels held in place with packing tape. Brilliant, right?

I started on the left end of the front gutter, and all went well with the three-or-so ladder placements it took to string the lights to a point just to the left of the front steps, during which the feet of the ladder were planted firmly on the lawn moss-and-yellow-crab-grass-covered earth where my lawn should be.

Which brings us to the point of this little tale: in my haste to finish the job, I then placed the ladder’s feet in the center of the front walkway and rested its towel-covered top ends against the moulding above the front door. In my defense, I tested the stability of the ladder’s placement by, you know, stepping on the bottom rung for a split second and gently bouncing up and down once or twice.

My rigorous inspection complete, I ascended until I was able to reach the gutter and began securing the string of lights. I affixed to the gutter a couple of the plastic light-hanging-fastener-things, then attached the—

And just that fast, I found myself lying atop the fallen ladder, the length of which had come to rest against the set of steps leading up from the walkway to the front door. It took place so quickly that I barely realized what was going on. In retrospect, I’m pretty sure it went something like this: the feet of the ladder presumably slid backward a bit on the relatively frictionless walkway, which resulted in the top of the ladder slipping off the moulding—an occurrence that, no doubt, was aided greatly by my use of hand towels as ladder guards.

Although I have no specific recollection of this part, my wife, who was reading a book to my daughter while seated on a couch just a few feet away from the front door, assures me that she heard the top of the ladder scrape its way down the entire length of the storm door, so it is fairly miraculous that the glass didn’t shatter and no visible damage was inflicted upon the door—an occurrence that, no doubt, can be largely attributed to my use of hand towels as ladder guards … so I at least have that minor victory going for me.

You know how sometimes, when you’re walking in public, and you suddenly trip or stumble on something, but then recover your footing by breaking into a little trot for a couple of steps before resuming your regular walking pace, and you’re wondering all the while if anyone is watching and laughing at what a bumbling doofus you are? Well, I knew right away that I must not have injured myself in the fall, because my immediate reaction was to jump right up and casually assess the position of the ladder and placement of the lights while thinking to myself, “God, I hope none of the neighbors saw that.”

A quick personal inventory made me aware that my left thumb hurt, but it was only slightly bruised. I am guessing that I must have placed a death grip on the rapidly descending ladder, and, upon impact, my thumb briefly got squished between the ladder and the steps. I most likely avoided more serious injury because I had coincidentally and fortuitously placed at the top of the front steps two cardboard boxes, in which I had carried out the lights and some other supplies. Somehow, those boxes ended up being positioned such that the left and right ladder rails landed squarely on top of them, crushing them in the process—and, as viewers of the Season 2 finale of “Fetch with Ruff Ruffman” well know, cardboard boxes can greatly aid in softening the impact of a falling object. (My son is addicted to that show, and never tires of watching the same episodes over and over and over again, so my wife and I have seen the cardboard-box-to-stop-a-falling-object thing a bazillion times—which is why she laughed her ass off when I told her it was one of the first things that flashed into my mind when I realized why I had barely avoided amputating my thumb with the ladder.)

Disaster averted, I managed to finish hanging the rest of the lights without incident, and the holiday season remained merry instead of tragic. Phew.