I bought this shirt about a year ago, not long after President Obama (President Obama! Sweet Jumping Jesus H. Christ on a pogo stick, I love saying that!) won the Iowa Caucus. At the time, I still thought he was a bit of a long shot, but, after having started off the campaign season convinced that Hillary was my candidate, I suddenly found myself swept up in the excitement of Barack Obama’s candidacy. The man moved me — and still does. And, thankfully, he also moved a majority of the voting public last November.

I vividly remember, with crystal clarity, sitting on the couch with my wife in our old apartment exactly eight years ago today, and being in a state of complete disbelief that the man taking the oath of office was actually going to be our president for at least four years. I just could not wrap my head around it.

When that same man was re-elected in 2004, I was done holding out any hope for presidential politics, and as the past eight years ticked by, I pretty much resigned myself to the fact that the relatively youthful experiment that is America was headed toward a complete collapse, perhaps within my lifetime.

I am elated and proud to have Barack Obama as my president. What an incredible day.

I wonder if Susan Collins is troubled by the fact that the president of the United States is an active and willing participant in a Russian intel op to undermine American democracy. 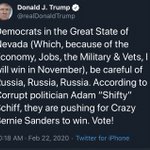 Glad to hear @TomPerez tell @JoyAnnReid that, post-2020, the party will be evaluating the usefulness of caucuses & the order in which states vote. Really wish they had addressed both after 2016. The problematic nature of both issues was glaringly obvious. #AMJoy

I’ve given this some serious thought.

This is disqualifying. We need to beat Trump. That requires everyone who is anti-Trump to band together. This pits anti-Trump forces against each other.

If Sanders didn’t personally tweet this, he should fire whoever did & disavaow it.

Happy birthday to @repjohnlewis, a living legend & American hero. Deeply honored to have once met you. Thank you for all you've done for our country. 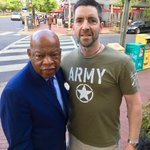 Well this is annoying.

@James1723241091 is a spam account using my profile pic & display name. I am blocked by this account. The link to the tweet shown in the screen capture here is:
https://t.co/IdZQDqh6oF

If you have time, please go to link & report as spam -> fake account 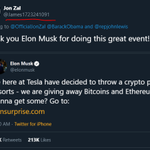 Went to @wonderspacesphl this weekend and it was w