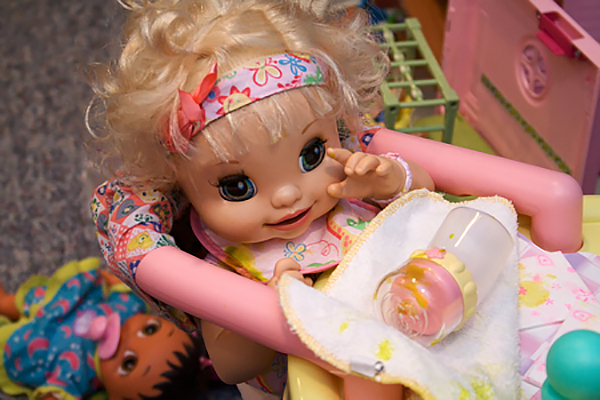 This little bundle of joy is Baby Alive Tink & Poops. No, that’s not her real name, but that is what Jayna has been calling her since, like, a year ago when she first saw the commercial. As you can probably surmise, the “Tink & Poops” part means she not only urinates—which is just so yesteryear—but she also defecates. And if there is one thing we need around here, it is a fake baby who shits herself, amirite?

But she is all my daughter wanted for Christmas, so Santa came through, and my daughter, well, she was beyond excited when on Christmas morning she found her new baby under the tree.

“What are you going to name her?” we asked.

“But don’t you want to give her a pretty name, like Stephanie or Rebecca or something?”

And she meant it. It’s February, and blondie here remains known only as Baby Alive Tink & Poops.

I’ll let you in on a little secret, though: I have my own special pet name for her, which I’ve not yet shared with anyone. I like to call her the You’ve Gotta Be Fucking Kidding Me Doll.

Because, look, I have a sense of humor, OK? I can take a joke. But this little bug-eyed brat? She pushes it way too far.

As if the tinking and the pooping weren’t enough, missy here also talks. So, the first time she announced that she was hungry, well, my wife and daughter whipped up a delicious bowl of green glop made from the special powder that came with BATP, and my daughter then shoved it down BATP’s gullet.

A short while later, of course, BATP announced that she needed to go potty. Ever the attentive mother, my daughter sprang into action, removing BATP’s diaper and sitting her on the potty so that she could evacuate the green slop from her plastic rectum, and is it really necessary to make a doll that shits? I mean, come on, really? Isn’t the peeing enough?

So, OK, she pooped, and how exciting, look, there’s green faux-poop in the potty! Oy vey.

A couple days after BATP’s inaugural eating-and-pooping session, I was in the playroom with the kids when BATP announced that she had to go potty. My daughter looked at her from across the room, then continued playing with Zan and me.

“Aren’t you going to go help her?” I asked my daughter, who shook her head “No” with a guilty look on her face.

“Hurry! Hurry!” BATP continued, but to no avail. Apparently, my daughter had already gotten her fill of motherhood.

“Uh-oh. I made a stinky,” BATP announced … and she sounded just a little too cutesy about it—as if she knew that the child who was supposed make sure she didn’t unload in her pants no longer was interested in handling that task, and responsibility for the matter would now rest with that child’s parents. The joke was on her, though, because, after years of changing poop-filled diapers for my long-ago-potty-trained kids, there was not a chance in hell I was going to start doing it for a doll. Stew in it, buttercup, ’cause I got nothin’ for ya.

A day or two later, however, BATP still had not been tended to, and because I am a borderline-OCD-afflicted clean freak, I could no longer deal with her slop-covered, faux-feces-ridden presence, so I took her upstairs, stripped her down and gave her an enema to get all of the dried and coagulated slime out of her digestive tract. I then suggested to my daughter that we stick with giving her water, but no more food.

My daughter relayed this information to Mommy later in the day by telling Mommy that she no longer wanted to feed BATP, because “it’s yucky.” Mommy, however—who does not share my anal-retentive/OCD-ish neuroses—knew that any suggestion of taking the “pooping” out of Baby Tink & Poops’ job description must have originated with me, and quickly assured my daughter that she could forget about what silly Mr. No-Fun Daddy had said; the feeding and the pooping could continue.

OK, fine. I could deal with that, because the rule book says: “She who rescinds a declaration issued by Daddy subsequently is responsible for the aftermath of the rescinding.” BATP would now be Mommy’s problem.

But here’s the part of the story where BATP really earns the honor of being dubbed the You’ve Gotta Be Fucking Kidding Me Doll: my wife and kids returned home from running errands the other day, and among the things they had purchased while out was a fresh supply of “food” and diapers for BATP.

Now, firstly, fuck that noise. Plus, also, no fucking way. Like I said: I have a sense of humor, but I am not working for The Man so that we can keep Ms. Shit & Piss well-fed and diapered. Helllllllll no. (Oh, and a special memo to the toy-company assclown who thought up this little scam: You suck.)

Fortunately, BATP has since been mostly forgotten, and has been sitting in the position and manner shown above for days—and, as far as I’m concerned, she can wallow in dried green goo until the house crumbles down around her, because to bring her upstairs and clean her would be to remind my daughter of her existence, thereby starting up the whole cycle again.

Of course, BATP might have a new lease on life nonetheless, because, among the dirty dishes I cleaned last night, I discovered this: 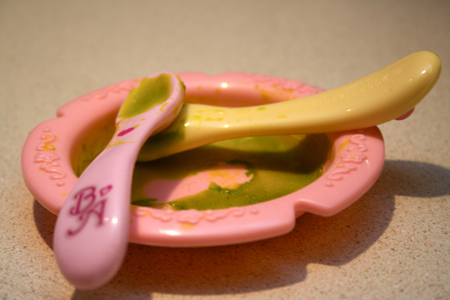 (And, no, doing dishes for a fake baby who fake shits herself doesn’t feel the least bit ridiculous. Why would you think that?)

So it looks like Mommy might be getting ready to resuscitate her—which is fine … as long as she starts wearing cloth diapers and eating like a flea. For I am the Lord of the Manor here, and there will be no more of this buying-food-and-diapers-for-a-doll nonsense on my watch.

It feels good to say shit like that previous sentence … because it allows me to pretend for a second that there’s some truth to those words.

There isn’t. Now, if you’ll excuse me, I have to get back to work. Gotta keep bringing in that paycheck so the fake-pooping doll doesn’t fake starve to death.