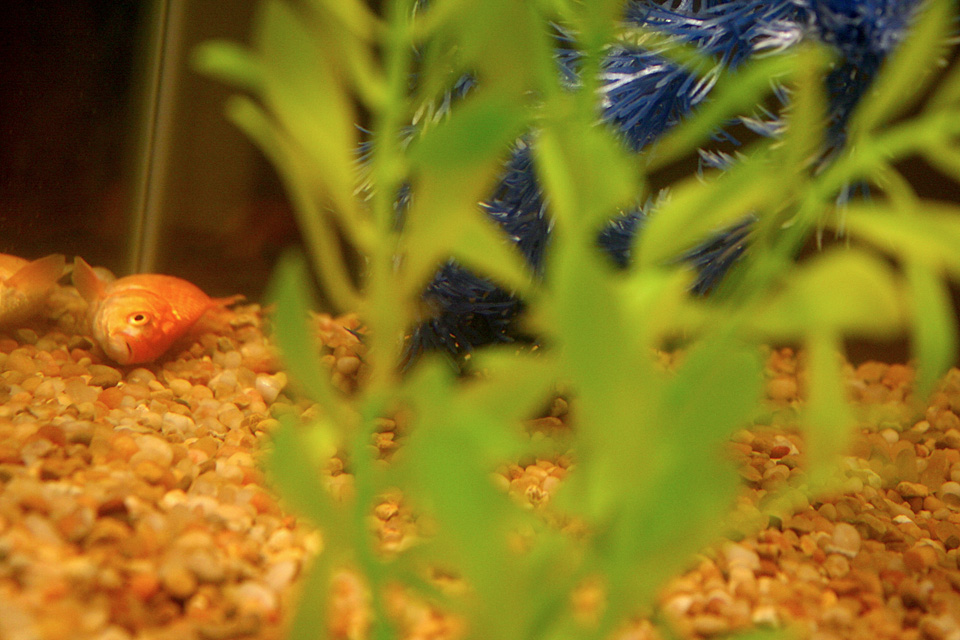 OK, so get a load of this one:

“Oh, she did, huh?” I said as I stepped outside to ask Mommy what the fuck she was thinking. And there she was, unloading from her car a new fish tank and various fish-having supplies.

“You’re kidding, right?” I asked her. “You just brought the kids home with live fish, a new fish tank, and all this other shit, but it’s up to me whether or not they can keep them? Yeah, that’s what I’ll do: I’ll tell them they can’t keep the fish, and have you take everything back. And after that, I’ll make them watch me club some baby seals to death and throw some puppies in a river so they can see what it looks like when baby dogs drown. Sound good?”

My wife proceeded to tell me a tale in which Zan asked if he could play a game at the fair, and it wasn’t clear what the prize was, but when he won, the douche canoe running the game went over to a barrel and pulled out a pair of live goldfish for the kids.

Now, truth be told, we had been talking for some time about getting a fish tank, so I wasn’t all that flummoxed about the fish situation. I just thought that the whole “It’s up to you if they can keep them” thing was preposterous, given the circumstances. That’s like going for a family roadtrip, falling asleep in the passenger seat, waking up in front of Disneyworld and seeing your kids wearing those friggin’ mouse ears, and your wife holding four all-day tickets and saying to you, “But I told the kids we can’t stay unless you say it’s alright!”

So, of course, who ends up preparing the tank and all the accoutrements? Yes, me. And I was worried the fish weren’t going to make it, because you’re supposed to let the tank stabilize for 24 to 48 hours prior to adding fish, but those fuckers had been trapped in little plastic bags for god knows how long, and the pet shop dude supposedly told my wife it was OK to add them right away, so that’s what we did.

And damned if they didn’t take to the tank just fine. They were all swimmy and active and happy, and yay for our new fish friends! And every day, right through yesterday, I kept saying to the kids — whom I had initially warned that the fish might not survive the shock of being placed in a tank full of tapwater — “Wow, guys, looks like the fish are doing great, huh?”

But this morning, when I got out of the shower and opened the bathroom door, there was Jayna.

And she seemed to be taking it OK, but I’m the biggest sap you’ll ever meet in your entire life, so I felt a little bit of heartbreak, both for her, and for the sudden death of our new family member.

But, OK, at least Zan’s little dude seemed to be doing fine … and when I returned home from work, he was still swimming his little fishy heart out, and looking good.

And then, just after the kids went to bed, I glanced over at the tank and saw what you see in the photo above.

Now, don’t laugh, but, truth be told, I actually felt a little twinge of sadness … mostly for my kids, but also because I kinda liked our new fish.

And what have we learned from this, class? We’ve learned that I plan to never own a dog, because I’m far too emotionally fragile. It was hard enough to say goodbye to my K-9 partner when I got out of the army (especially because, unlike my other army buddies, he didn’t know I was saying goodbye to him); no fucking way am I going to set myself up to deal with the death of a beloved dog who was part of our lives for 10 or 15 years. Thanks anyway.

But we’ll be getting some new fish soon. I mean, might as well; the damn tank’s all set up now.