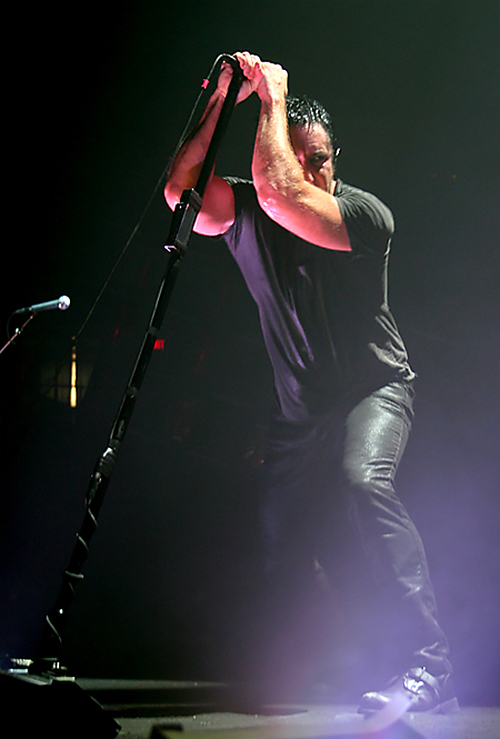 “Sir, I’m a journalist,” the naive youngster says, holding up as a form of identification a copy of the publication for which he is due to conduct the interview. “Here’s a copy of the magazine that I —”

“Not on the list,” the guard says while some nearby groupies chuckle about the boy’s embarrassing predicament.

This scene is, for me, perhaps the most memorable moment of the entire movie, for it is an experience that I have lived through on more than one occasion.

The most recent occurrence happened earlier this year when I took a friend with me to a Chris Cornell concert that I was reviewing. After standing in line, we reached the door to the club, where stationed was the girl holding the ever-present clipboard to which was fastened the mythical “GUEST LIST.”

“Hi,” I said in my most charming fashion. “I’m supposed to be on the list.”

I provided it. She scanned the list, flipping through it until she reached the last page, then let go of the previous pages, which fell back into place.

I told her the name of the publication. She flipped through the list again.

“Really? Wow. Chris’ publicist just emailed me today and said she’d have me down for a plus-one,” I said, attempting to bowl her over with my knowledge of guest-list lingo. (“Plus-one,” as you can probably surmise, means the reviewer can bring a friend along.)

And it is at that moment that she and everyone within earshot joined in an unmatched display of synchronized telepathy by mentally shouting in unison “Bullshit!”

The thing is, I really was supposed to be on the list … so, rather than slouching over, slinking away into the night and finding a safe haven in which to nurse my ego back to health, I did the Douchebag Shuffle. This is the move where you say, “Well, if you don’t mind me standing off to the side here, I’m going to make a call to see if I can straighten this out,” and then step out of the line and shuffle on over to rock-concert purgatory, where you stand on display to be looked down upon by the other guest-listers and ticketed concertgoers as they enter the club without incident.

And now the game is on, because the guest-list girl and the security guards at the door? They think you’re full of shit, and that your little charade of pulling out your cellphone and calling someone is a weak attempt at saving face. But you know you’re for real, and you’ve been doing this for years, and this isn’t the first time this has happened, which is why, just before pulling out of the driveway to head to the show, you remembered to run back into the house and program the publicist’s phone number into your cell.

After a short conversation with said publicist, I hung up and informed Guest-List Girl that there was another list on its way, and that my name would be found therein. She shot me a withering look of feigned pity that, if verbalized, amounted to “Suuuuuuure there’s another guest list on its way.”

But, lo and behold, along came a higher-ranking Guest-List Girl, backstage laminate swinging from the lanyard around her neck. She held in her hand a new list, and my name was, in fact, on it. Original Guest-List Girl’s surprise was palpable.

Over the years, my wife and I have been fortunate enough to attend numerous concerts thanks to my job, but the frequency with which I go to shows has diminished greatly since the arrival of our lovely cherubs, and on those rare occasions when I am inclined to do so, I often end up going without her — since, you know, someone has to get up at an ungodly hour the following morning when the Pre-Dawn Duo rises, and, thankfully for me and my career, she is willing to be that someone.

Such was the case for the Nine Inch Nails concert the other night, which took place way out in Worcester, a city to which I would travel for perhaps no other reason than to see a Nine Inch Nails concert. Up until a day or two before the show, I had convinced myself I wouldn’t mind skipping it in order to avoid the hassle … but NIN is one of my favorite musical acts of all time, and their live shows are always spectacular, and so I ultimately concluded that I wasn’t OK with skipping it after all.

With my wife having recused herself, I was left to find another date. I offered a free ticket to at least a half-dozen people, all of whom have kids and jobs and don’t get paid to stay out late at a rock concert.

So there I was, dragging my ass out to Worcester, alone, on a Sunday night.

“Who are your tickets from?” asked the woman behind the glass at the Will Call window as she eyed my driver’s license.

“The group’s publicist,” I said, bracing myself for yet another performance of the Douchebag Shuffle. She nodded and walked away from the window, and the Will-Call Window Craps game began. Would I roll a seven or snake eyes?

She returned, handed me an envelope containing my tickets and smiled. We have a winnah!

Written on the envelope were instructions to head to the security booth located at Door 5, where I would receive my photo pass. I asked a venue staffer where Door 5 was, fully expecting her to ask me who the hell I was and why I needed to know the whereabouts of Door 5. Instead, she did everything short of draw me a map and offer me a piggyback ride.

Wow. This was going far too smoothly.

When finally I arrived at Door 5, I expected it to be locked and heavily guarded. There was a goth-girl standing in front of the door with what appeared to be a list.

“Are you handling the photo passes?” I asked her.

“Do I check in with you for a photo pass?”

“I don’t work here. I’m just waiting for my boyfriend.”

I pulled on the handle and Door 5 swung open easily. Inside was a little lobby, where stood several other photographers. Opposite the doors was a large, plate-glass window, behind which was the security office. Everyone was just as pleasant as could be.

The two women whom the venue tasked with handling the photographers showed up and went into cruise-director mode — like, full-on Julie McCoy — introducing themselves to each of us, asking us our names and thanking us for being there.

I was looking around for a hidden camera, but it turns out it wasn’t a prank. In fact, the only complaint to be had was that, instead of shooting the first three songs, we had to wait backstage during the first two songs, then shoot during songs three, four, and five … which means I missed the beginning of the show. Also, when the band’s liaison finally led us into the security pit at the front of the stage and song number three commenced, its onset was accompanied by a deluge of fake fog that made the band practically invisible.

After the shoot, one of the pleasant and bubbly venue liaisons pleasantly and bubblingly escorted us into a service elevator that dropped us off at the seating level — and, serendipitously, right in front of a Sam Adams stand.

And so, cold beer in hand, I sat and watched the most impressive light show in rock-concert history (seriously; see for yourself) while listening to live renditions of some of my favorite songs performed by one of my favorite bands, and contemplated how far I had come since the first time I, metaphorically speaking, rang a backstage buzzer.