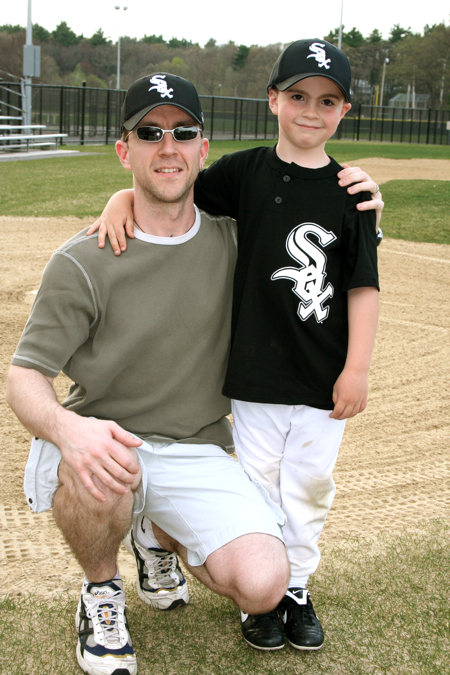 The title of this post seemed a lot more clever when my blog was titled “Daddy Scratches.” Just thought you should know. -JZ

Hey, everybody! So, yesterday was the first tee-ball game of the season, and I gotta tell ya—

Oh, excuse me for a moment; I have to take this call.

Hello? This is him. Who? Theo? Seriously? You what? Really? Well, um, yes, I’d love to! Thanks so much! OK, great! See you at Fenway next week!

Wow! That was Theo Epstein, General Manager of the Boston Red Sox. He wants me in the dugout for the team’s next home series. Seems the word is out about what a stellar coaching job I did with Game 1.

Hey, a man can dream.

But seriously, folks: coaching a tee-ball game? Way more enjoyable than coaching a tee-ball practice … and this realization comes as what I would call a “monumental relief,” because, in the wake of that whole coaching-my-first-tee-ball-practice thing a couple of weeks ago, I was kind of a’scared that this coaching gig might, well, um, suck. A lot.

But coaching a game? Piece of cake. One team is in the field. One team is batting. They play two or three innings. There is an automatic structure and rhythm to the whole thing. And, most importantly: I am not expected to come up with 75-minutes’-worth of skill-building drills … which really is such a good thing, because in order to effectively teach baseball skills, you have to have some, uh—what do you call them?—oh yes: baseball skills.

Truth is, I got off extremely light in the tee-ball-practice department; of the four scheduled practices, the first two were rained out, and I was out of town for the fourth.

Speaking of rain-outs: in all honesty, I almost was hoping yesterday’s inaugural game would get scrapped by the potential thunderstorm forecasters said had an outside chance of materializing.

I know, right? It doesn’t get much more lame than being a tee-ball coach and hoping for the first game to get canceled. It wasn’t just because of how overwhelmed and outmatched I felt after coaching the first practice, though; it was because the temperature yesterday, I shit you not, was 92 degrees Fahrenheit. Ninety-two. Degrees. In April. In Boston. Hello? Is this thing on?

When I swung by Town Hall yesterday to pick up my team’s shirts and hats, I half-jokingly asked if I could also get some heat-stroke kits. I figured once I got the kids suited up in their nice, cool, jet-black shirts and hats, at least half of them would pass out inside of 10 minutes.

But, as it turned out, things went just fine. The kids were excited to get their uniforms (and Zan was particularly excited to have first dibs on the number of his choosing; fringe benefit of Daddy being the coach), the two dads I’ve been counting on to be the assistant coaches were both on hand, I did a bang-up job of pretending I knew what I was doing, and everyone seemed to buy into my act.

Not only did I survive the first game, but, much to my surprise, I can honestly say that I had fun. I was unexpectedly comfortable with the whole thing, and I even felt like I did a good job of teaching the kids how to swing the bat and hit the ball. For reals. This, of course, is hysterical, because I have approximately zero experience swinging a bat and hitting a ball (though, when I was a teenager, I did once use a bat to smash some lightbulbs that I tossed into the air one at a time … you know, just to let off some steam. Because that’s normal. Gosh golly, are you in for a treat whenever I get around to writing about the teen years).

The only thing to which I can attribute my successful batting instruction during yesterday’s game—you know, besides straight-up dumb luck—is a short video I watched online a few weeks ago in which Red Sox first baseman Kevin Youkilis (who, by the way, currently is sporting a psychotically high .405 batting average) taught a teenage girl how to hit, and his advice apparently stuck with me. 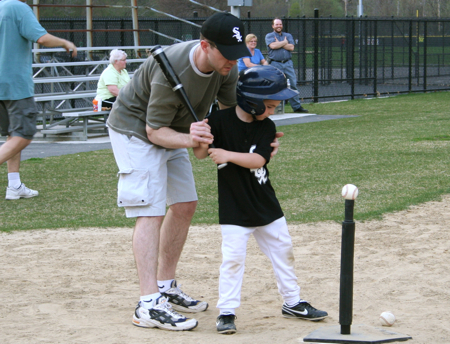 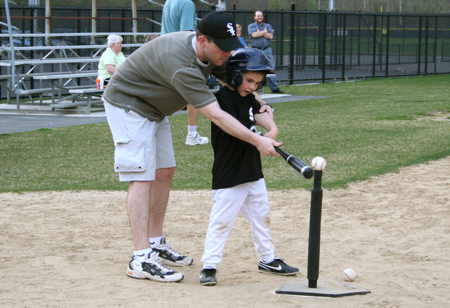 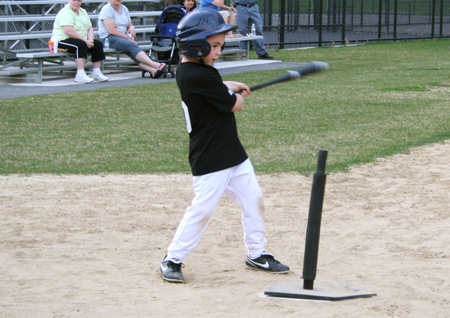 Believe me, no one was more surprised than I when a number of kids who were having trouble hitting the ball off the tee suddenly connected quite solidly after I helped them with their stance and swing. Made me want to look over at the parents on the sidelines and say, “See? I know exactly what I’m doing! Your child is in expert hands! I don’t blame you for thinking I was a total freak after witnessing that one practice I coached, but there’s a method to my madness. Yes indeed. A method. I call it the ‘Pretend You Know Exactly What You’re Doing and Hope Nobody Calls “Bullshit”’ method.”

And putting on that act for the sake of the kids and their parents would be all well and good, but here’s the thing: based on how well things went last night, even I am starting to believe my own hype.

But, really, when you get right down to it, this entire fatherhood thing is basically one giant exercise in making shit up as you go and acting like you know what you’re doing, so I suppose I am more than qualified for the coaching job.

Hey, whatever it takes. All I know is that I had a good time, the kids seemed to have fun, no one died, and my boy still thinks I’m the “Best Coach Ever.” Can’t ask for much better than that.