Last weekend, my mother-in-law treated me, my wife, our kids, our nephew and WW’s older brother to the Philly Pops’ annual holiday concert at The Kimmel Center for the Performing Arts — or, as I like to call it, The Anxiety-Provoking Center for the Provocation of Anxiety in the Overly Neurotic Parent Who Fears the Accidental Falling from Great Heights and Subsequent Premature Death of His Children and Nephew.

The building itself was as spectacular as had my wife, mother-in-law and brother-in-law led me to believe it would be. An architectural masterpiece, really. Unfortunately, when I’m responsible for the wellbeing of three children whose collective age wouldn’t earn them entry into a bar, my ability to fully relax and appreciate my surroundings is greatly diminished … especially when said surroundings include a short and flimsy-looking glass barrier whose ability to keep them from plunging to their deaths the three rambunctious children are testing with tremendous zeal.

… I tried to remain as apparently unfazed as were the other three adults in my company by the fact that a half-inch-thick, see-through substance was the only thing keeping our children alive … but when Jayna, envious that the two boys were tall enough to look over the top of the glass, decided to try to pull herself up high enough to do the same, my thinly veiled anxiety began to break through the surface in large swaths … and when the boys decided to “help” her by placing their hands under her armpits with the intention of hoisting her upward, I snapped.

“Whoah, whoah, whoah!” I exclaimed while reaching for the kids, who, at that moment, were closest to my wife and her brother, both of whom have a much higher threshold than I for the taking of unnecessary risk.

Brother-in-law: I think my favorite sensation is the feeling you get from cliff-jumping.

Me: I wouldn’t know.

Brother-in-law: You’ve never jumped off a cliff into the water?

Me: Can’t say as I have. See, the thing is, I always weigh the risk against the reward. Is the feeling one gets from jumping off a cliff worth risking paralyzation or death?

I’m also a lot of fun at parties.

Look, it was high. Seriously high. Like, feels-like-your-cojones-are-sucking-up-into-your-lower-abdomen-just-from-looking-over-the-edge kind of high. (Ladies, that reference will mean nothing to you, but the guys know what I’m talking about.)

“Every ounce of parental instinct in my body is screaming at me right now to grab the three of them and pull them away from that glass,” I explained to my brother-in-law, who clearly was oblivious to the highly unlikely catastrophe that was threatening to transpire.

Thankfully, my vigilance paid off, as not a single child fell to his or her death … which is why we subsequently were able to enjoy the performance, which took place in this spectacular auditorium: 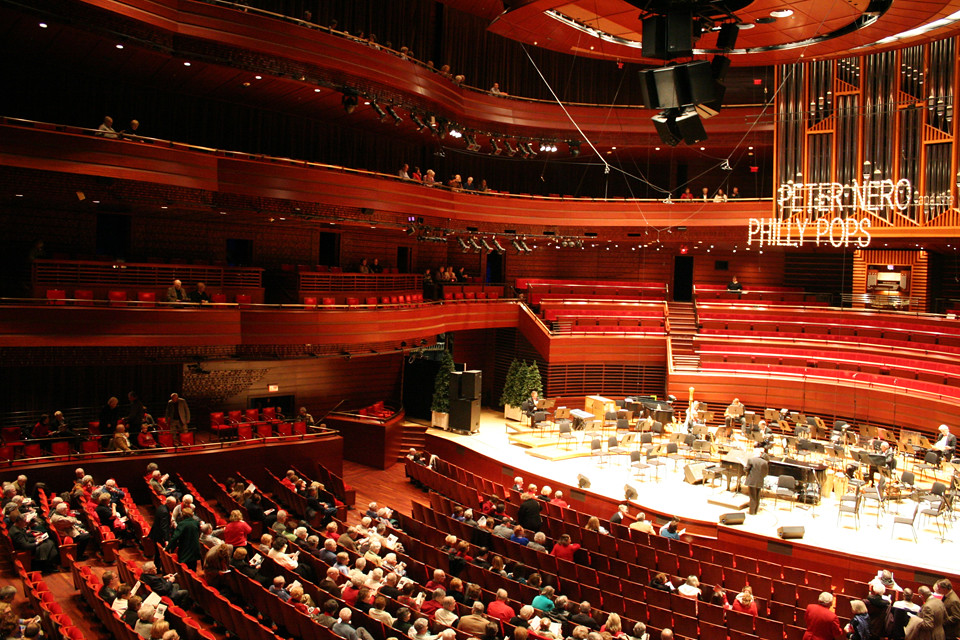 Afterward, we went to dinner at a lovely French bistro, where I again had to assume my superhero persona in order to save the children from the evil votive candle on our table, which they couldn’t stop toying with despite repeated requests that they keep away from it. Being the easily irritated douche heroic and reasonably protective parent that I am, I decided to neutralize the threat by snatching up the candle in a mini-hissy fit and blowing it out with way too much force, a sequence of events that resulted in me spilling candle wax all over my hand, shirt and pants.

But, hey: The kids didn’t light themselves on fire … and it was all thanks to my woefully short fuse and utter lack of impulse control selfless act of pure heroism.

Now, if you’ll excuse me, I have to get back to saving everyone from imaginary disasters. (Are we beginning to see a pattern here, people?)