Look, what I wrote in that previous post is what spilled out of me in the immediate aftermath of Tuesday’s election, at a time when I was in, shall we say, a state of heightened emotions … but the main thrust of my words remains: Whether or not Donald Trump and/or the bulk of those people who voted for him intended for the forces of hate and intolerance to interpret his electoral victory as an endorsement of their own sick, twisted agendas, those forces — many of whom heretofore at least had the decency to keep their disgusting views on the down-low — now feel energized, emboldened and fully entitled to make life hell for anyone who does not look and think like them.

Since publishing that post yesterday, I’ve re-read it a number of times … and, earlier today, I was toying with the idea of taking it down … or at least toning it down. And in the middle of contemplating that approach, I had this unexpected exchange with a close friend from Massachusetts: 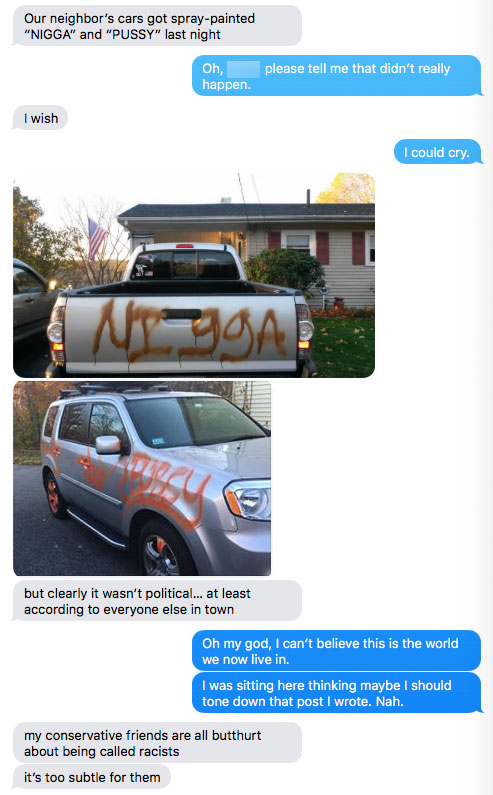 So, um, yeah … I stand by what I wrote yesterday.

I suppose it’s possible that a lot of good and decent people voted for Trump … and I can only assume that those good and decent people simply failed to recognize just how catastrophic their decision would be for others, if not for themselves … and that is what I can not abide. I can not abide what I believe amounts to sheer selfishness. Voting for Donald Trump was, at best, a very selfish thing to do. And I abhor selfishness … especially when that selfishness hurts others.

I keep reminding myself that there very well may never have been a President Obama if not for the disastrous presidency of George W. Bush. Whether or not it was worth the cost is debatable … and the cost we are about to pay for a Trump presidency seems unfathomable … but I believe that, whatever the final tally, the payoff will be another historic victory of our own next time around. (Can you say “President Warren”? Might as well start practicing. If nothing else, it feels a hell of a lot better than saying “President Trump.”)

These are dark times … and we almost surely are about to experience firsthand that whole “it’s going to get worse before it gets better” thing … but I believe it eventually will get better … as long as enough of us are willing to make it so. In the meantime, as I said yesterday: Let’s all look out for each other, m’kay? Yes, things suck right now … but we are not alone. In fact, we are the majority. Let’s not hesitate to act like it, and let’s not hesitate to wield that power when next we are presented wth the opportunity to do so.