Why, I haven’t seen anything like this since … well, ever, really … but the prize for second place goes to: 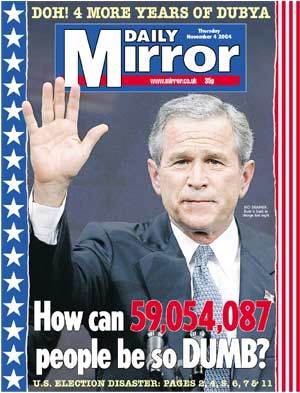 Hey, look! Another awful Republican candidate who once lost the popular vote but still won the presidency thanks to you backward-assed Red States! (In related news, I’m pretty sure it’s time for that whole “electoral college” thing to fuck right off, m’kay?)

Now, if, back in those days, I had just taken a big sip of something but had not yet swallowed, and you had chosen at that very moment to tell me that I one day would say “The incoming president almost makes me miss George W. Bush,” I’d have done a spit take that would have left you soaked from head to toe in whatever it was I was drinking, plus my saliva, all of which I would have firmly believed you deserved to be covered in for saying something so patently offensive and ludicrous.

And yet … here we are! Sorry for spitting all over you! I just had no idea it could actually get worse.

You see, the thing about Dubya was that he simply … well, let’s just say it: Dubya was a bit dim … and massively under qualified for the gig … and easily manipulated by the Cheneys and Rumsfelds and Wolfowitzs around him. And, yes, that Iraq War thing? That’s still the biggest fuck-up of my lifetime. Can’t really let him off the hook for that one. But at least he wasn’t a vengeful, spiteful, hot-headed, bad-tempered, narcissistic, ego-maniacal lunatic and pathological liar whose entire skill set consisted of self-promotion and self-enrichment at the expense of everything and everyone around him … which, thanks to the combined efforts of a gullible and/or hateful electorate, now means “planet earth.” Nice going, assholes.

And so, on behalf of all us “elitists” — you know, the reasonable, rational, fact-loving, semi-well-informed, relatively clearheaded grownups who overwhelmingly voted for the other candidate — I’d just like to thank you Trump voters for choosing to express your frustration with The Way Things Are by playing Russian Roulette with our collective future. That was a magnificent display of the critical-thinking skills you so clearly lack.

Unfortunately, instead of the immediate “click” or “boom” feedback of a traditional round of Russian Roulette, we’ll have to wait days, weeks, months, and, Satan willing, quite probably years to find out just how badly you’ve fucked us all … but, based on the behavior thus far of our perpetually tantrumming President-elect, I’d say the smart money is on “Oh-so badly.”

All of which is just my way of saying: “Hi! Welcome to my new website!”

I decided to launch ScratchPolitics.com and its accompanying Twitter account as a place to house the politically charged 140-character outbursts and long-winded rants that, since election night, seem to have become my raison d’être. This is where I will be venting my outrage, frustration and incredulity for the duration of Donald Trump’s sure-to-be-horrifying presidency, which I am hopeful will not actually last four years … a sentiment with which I’m sure even Trump himself would agree … because, let’s face it: not even he thought he had an actual chance of getting enough morons to vote for him. Yes, one minute, he’s just trying to up his Q-rating in order to cut a better post-election TV deal, and the next minute, he’s all, “I what? I won? I’m the president?? Oh, shit.” Just imagine his surprise!

I’m not here to change minds; I’m here for catharsis. If I don’t write about this horror show, my head will explode. (Probably, my head will explode anyway, but, hey, at least I’ll get to do some writing first.) But if, in the process, I can add my voice to the collective efforts of those who refuse to normalize this very abnormal situation, then I am more than happy to do so.

Good luck to us all.