The odds of me getting that ticket were so infinitesimal, I almost didn’t try. Seriously.

Look, I’ve been in this game a long time now, and I’ve gotten hooked up for some pretty exclusive gigs, but U2 in a tiny Boston-area theater, playing for less than 1,000 people, most of whom were contest winners from around the country? I know rejection when I see it, and this was rejection on steroids with a tire-iron in its hand, just looking for an optimist it could clobber the hell out of.

But I had to give it a try, right?

First, I emailed the group’s publicist. I’m still waiting for her to get back to me.

Then I carpet-bombed everybody at the band’s label. Again, no reply.

“Well, at least I tried,” I told myself.

Wednesday morning rolled around. The day of the show. There was not a single person in the state of Massachusetts who wasn’t aware that U2 was in town for an ultra-exclusive performance. Every radio station, television station and newspaper was wall-to-wall U2. There were multiple articles in both of the major Boston dailies, one of which—titled “No Bono for you, Boston bigwigs”—specifically addressed just how impossible it was to secure a ticket to the show, no matter how much juice you had in the city of Boston.

So, of course, I decided to give it one more try, because few people are more incapable of recognizing when to quit than yours truly.

I carpet-bombed the label folks again. A short while later, my cell phone rang.

“Hi, Jon, this is Lisa from Interscope. I emailed you yesterday to tell you that I have you on the list, but your email bounced back ‘undeliverable.'”

[INSERT SOUND OF 5,000 PHONOGRAPH NEEDLES GETTING DRAGGED ACROSS A VINYL RECORD (and if you don’t know what a “phonograph needle” or a “vinyl record” are, ask someone who grew up in the ’70s.)]

In the roughly decade-long span that I have been a music journalist, I have sent and received hundreds of thousands of emails. I can’t recall ever running into a situation when a correspondence sent to my work email failed to arrive—you know, except for THAT ONE TIME WHEN A REPRESENTATIVE FROM U2’S RECORD LABEL EMAILED ME THE NEWS THAT I HAD SECURED THE SINGLE MOST DIFFICULT-TO-OBTAIN TICKET IN THE WESTERN HEMISPHERE.

And this woman, this wonderful woman—no, this wonderful saint of a woman—who was being inundated with requests for this show, and who could have leveraged a pair of tickets for a free vacation at the Turks & Caicos Club (yes, I’m serious; scroll down in that “Boston bigwigs” article I told you about), instead picked up the phone and called me.

Which is how I came to be standing in front of this window later that same day: 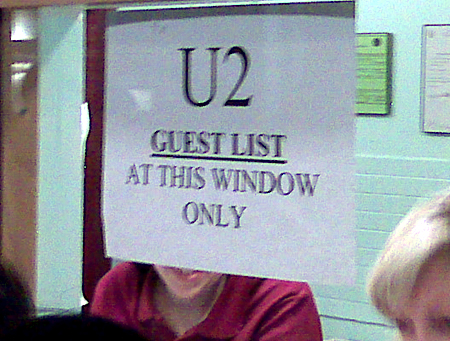 Now, as I’ve discussed previously, when you’re on the guest list for a high-profile show, things often go awry … and if ever there was a show at which things were likely to go awry, it was this one.

Which is why I was utterly amazed when, while waiting behind another guest-list recipient, I could already see sticking out of the pile of guest-list tickets the envelope with my name on it. Yes, that is how smoothly this whole thing went.

So I’m thinking my seat is going to be located, like, here:

But, hark, what is this I see? The usher to whom I have handed my ticket is leading me down the aisle … and, man, this is a small room … and, wow, we’re still walking … and he appears to be telling me I’m seated in the third row.

And it is at this point that I am expecting Ashton Kutcher to appear, and everyone in the room to start pointing at me and laughing while it’s all captured on camera for a special episode of “Punk’d.”

But Ashton Kutcher does not appear. No, the celebrity who appears is Bono … and he sings his ass off for five songs while The Edge and Adam Clayton and Larry Mullen Jr. play the hell out of their instruments, and I’m taking shitty pictures of it all with my BlackBerry (which, as it turns out, is still more than the contest winners can say, because they were required to park off site and surrender any camera phones before boarding the buses that transported them to the venue). 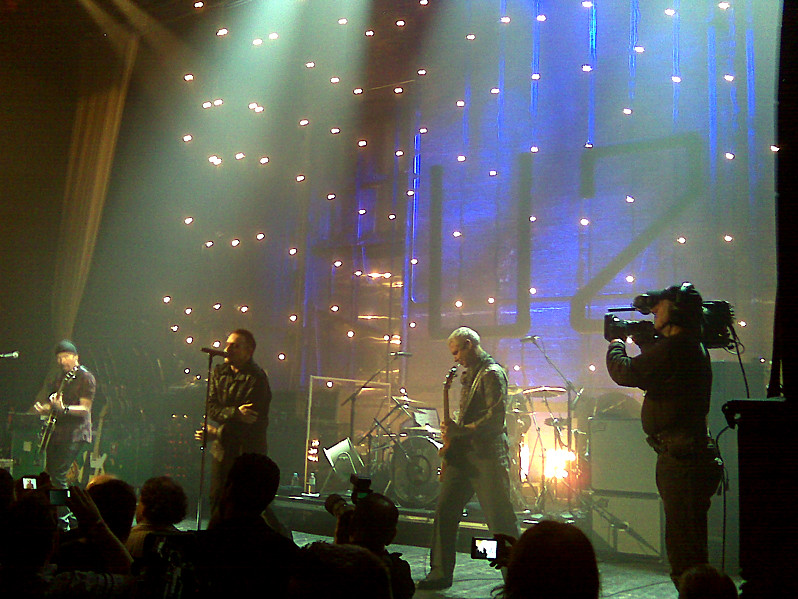 Now, I will be brutally honest with you here: The band’s five-song performance was the balls. Complete and utter awesomeness. Unfortunately, however, the performance was just one part of an hour-long radio special that aired live during the event. So, after blowing the roof off the place, Bono and company left the stage, then returned a few minutes later, sat down and were interviewed by MTV veejay Sway, who talked too much and asked the guys moronic questions that a handful of audience members had submitted before the show.

And I can assure you that there was not a single, solitary soul in that room who was glad that, instead of rocking out while the band played five or six more songs, they were instead hearing Bono get asked when he lost his virginity courtesy of a question submitted by a 16-year-old, and no, I’m not kidding.

Chances are my displeasure with the lame interview segment was exacerbated by the fact that, seated where I was (because everyone sat during the snoozefest, er, I mean, interview), I could see the backs of two cameramen, the enormous belly of the security dude assigned to my aisle, and Sway. And perhaps you didn’t notice, but the folks I just listed? None of them are in U2. So that kinda sucked.

It was not lost on anyone, however, that all of the band’s gear was still set up throughout the interview, and when the radio broadcast ended and the guys left the stage, we all erupted in a boisterous chant of “One more song!” And I could totally tell that they were going to play at least one more song, because the roadies weren’t breaking down the gear, no, they were double-checking to make sure everything was just so, and the drum tech was placing Larry’s in-ear monitors lovingly atop the snare drum so that they’d be at the ready when Larry sat back down to kick out the jams, and the chanting continued, and the excitement swelled to a crescendo …

And the houselights came on and some canned music sprang from the speakers, and it was time to go home. Damn.