You see, Scott, I am a major control freawok … but, unfortunately, I am neither qualified nor equipped to install Verizon FiOS. Thus, I begrudgingly had to relinquish control and allow you to have free rein around the inside and outside of my house today.

Don’t take it personally, Scott; I get twitchy and anxious when anyone is doing any work on my home of any kind. I always worry that the person performing the work is going to accidentally fuck something up and leave me with a new problem that didn’t exist until they dicked around with whatever it was with which they had to dick around.

And so when you started drilling that big, fat hole in the side of my house in order to run your fiber-optic line into my basement—well, let’s just say that my anxiety rose to threat-level orange. Were you drilling through the cement along the outside foundation? And, if so, was that cement cracking and/or breaking off in big chunks as a result of your drilling? And just who is going to fix that, Scott? Hmmm??

Or maybe you were drilling through the asbestos shingles that form the siding on the house, in which case: were any of those shingles cracking?? Because then I’m really going to stress out, since a.) I’m told it’s nigh impossible to repair those, and b.) ASBESTOS DUST! AGGHHHHHHHHHHHHH!! (Yes, I’m fairly certain a cracked asbestos shingle wouldn’t actually pose any health threats, grave or otherwise, but what if I’m wrong about that and WE’RE ALL GOING TO DIE BECAUSE YOU COULDN’T HANDLE DRILLING A HOLE WITHOUT FUCKING UP MY HOUSE, SCOTT? HUH? WHAT ABOUT THAT?)

And what is the deal with that FiOS box and backup power supply you have to install in my basement, Scott? You’re mounting it where? On the wall? And you have to run a plug into the outlet shared by the washer and dryer? Well, surely, I should brace myself for an outright catastrophe of monumental proportions … one that likely will result in the wall being destroyed and my wife and/or I electrocuting ourselves while washing our clothes.

And let’s not forget the fact that your installation almost surely is going to cause me to have no Internet access for, like, a week … which is unacceptable, Scott. The Internet is my livelihood, and my security blanket, and my friend, and I—why are you looking at me like that, Scott? OK, so maybe I love the Internet a little too much … but that’s none of your business, now, is it, Scott? No, the thing that is your business is setting up my Internet service … and I just know you’re going to fuck it up.

Then, of course, there’s the whole FiOS-television situation. That’s really what prompted me to take Verizon’s bait to begin with: we’ve had Comcast cable for four-and-a-half years, and the picture quality, Scott … you’d weep. Weep openly. You wouldn’t? Well, I’ll do the weeping for you, since I’m the neurotic one here.

But now you’re telling me that, instead of installing a new FiOS jack near the television, you’re just going to use the existing coaxial cable—the very same cable that snakes its way through the basement and comes up through the floor and wraps its way around the room and has been delivering to us lo these past four-and-a-half years the aforementioned shitty picture. Well, that’s just great. All is lost. I’ve allowed you to fuck with my home for no reason, because, clearly, I’m just going to end up with the same fuzzy, unwatchable, dogshit picture.

And so, as you can see, Scott, I had concerns about your visit today. But you, sir, did a phenomenal job. Seriously. Everything went like clockwork. I was without Internet access for less than an hour, and when I established my new FiOS connection, I was more than pleased with the speed at which I was cruising the Internets.

And there was nary a hiccup with the phone service; my old phone number was transfered over without incident, and the phone works just fine, so no worries there.

And I’m not exaggerating when I tell you, Scott, that the FiOS television experience has positively exceeded even my wildest dreams about how much better the reception would be once Comcast was in my rearview mirror. I swear to Christ, everyone in the house feels like we just got a brand-new, kick-ass television. I can’t believe the same television we’ve had all these years is capable of producing a picture so crisp and clear and vibrant … and just in time for baseball season! I could kiss you, Scott. (No, don’t worry, Scott; I’m not really going to kiss you.)

Although, on second thought, I might have to kiss you, Scott, because you actually took the time, without my asking, to properly configure my new Verizon FiOS remote control so that I can control the television, the FiOS DVR, the DVD player and the surround-sound receiver with a single device. Did you happen to see the FOUR separate remote controls on the coffee table, Scott? Did you? We’ve been using all four of them ever since our universal remote suffered an untimely death at the hands of the sleep-deprived mother whose patience it so unwisely tested at a moment she had none left. (And I’ll let you in on a little secret, Scott: even when we had that fancy-shmancy, expensive, universal remote, I still wasn’t able to get it to properly handle the whole simultaneously-turn-on/off-all-of-the-entertainment-center-components-with-a-single-click thing. But you made it happen. I don’t know what to say, Scott. Frankly, I’m a little verklempt.)

So, not only did you show me that all my anxieties about the FiOS installation were unnecessary, and not only did you do one hell of a job upgrading the technological infrastructure of my home, but you also bonded with me a bit about the Red Sox and U2, and my goodness, sir, it was a delight having you here today.

And then you left, and I marveled at the television picture some more, and then sat back down at my desk to do some work using my ultra-fast Internet connection, and man, was I relieved.

And then I heard a noise unlike any other that has ever graced my ears. I had not the foggiest idea what it was, but I was quite sure that whatever act had produced that sound was one of a wholly destructive nature. Was it a tree falling on a neighbor’s house? A nearby construction project collapsing? A giant ogre bowling a strike using a boulder and 10 cars?

Intrigued, I made my way to the front room and cast my gaze out the window, whereupon I discovered the source of that oh-so-unnatural sound.

And the source was you, Scott. You and your big, bulky, Verizon-FiOS-installer-guy truck, which you all-too-sharply turned to the right before clearing the end of my driveway, thus crashing the right side of said truck into the corner of the stone-and-cement retaining wall that runs around my front yard. 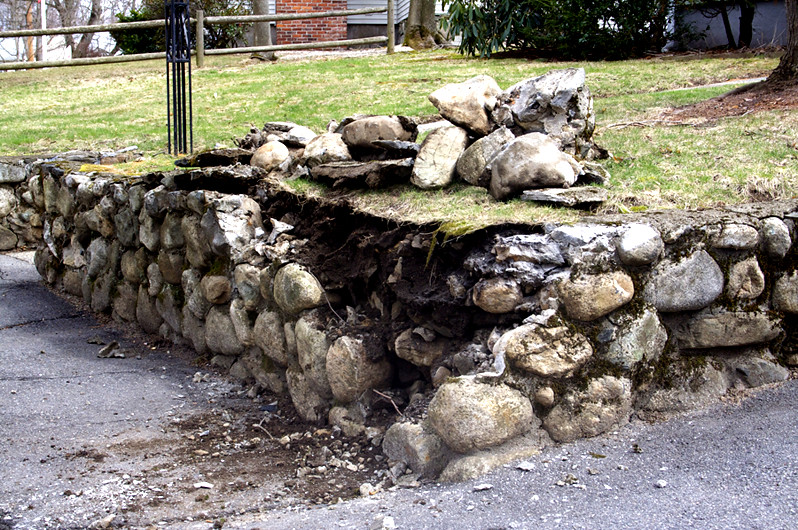 I know you can’t believe it, Scott. Neither can I. I mean, seriously, dude: after clearing every imaginary hurdle I had placed for you in my mind—with room to spare, no less!—you then caused a structural calamity when you were literally just inches from being in the clear!

You handled it well, though, Scott. You called your manager, and you sent to him a picture of the wall that you had taken with your phone, and you informed me that I can contact that manager and send him the repair bill, and he’ll see to it that Verizon picks up the tab, no problemo.

And for all of my neurotic anxiety, Scott, I was surprisingly undisturbed by the incident. In fact, if there was a predominant emotion that I was having in that moment, it was pity for you, because I knew you felt awful and embarrassed and silly about what had happened, and because I feared that you’d end up having to deal with some unpleasant repercussions at work due to your feaux pas.

But, truth be told, Scott, if you were going to fuck something up today, I’m actually glad it was the wall … because smashing the wall didn’t affect my ability to connect to the Internet, nor did it change the fact that I now have a startlingly gorgeous picture on my television.

Now, had it affected either of those things … well, that would have been unforgivable.