When I was a little boy, and thunder rumbled in the distance, my mother would react as though the approaching storm was an Afghani mortar attack instead of a minor weather event. Because of this, I spent much of my childhood reacting to thunderstorms in a similarly panicked fashion.

When my mother was a little girl, and thunder rumbled in the distance, her parents presumably reacted calmly … until that one time when the electricity went out during a storm, and they sent her to get from her upstairs bedroom something to play with, and she opened the door at the bottom of the staircase, and looked up to see that the second floor was engulfed in flames … because lightning had struck the house.

So she gets a pass.

Fortunately, by the time I became a parent, I had learned not only to not panic over the arrival of an electrical storm, but to rather enjoy it. And when the sound of thunder caused my own young children to react in an understandably fearful manner, my wife and I would calmly reassure them that there was nothing to be afraid of.

Let us travel back in time, shall we? Destination: The kitchen of our former home in Massachusetts, June of last year. The sky is dark, the lightning is flashing, the thunder is rumbling, and the rain has suddenly begun to come down in torrents.

We see my wife standing beside the kitchen table with our then-4-year-old daughter in her arms and our then-6-year-old son by her side. They have been startled by a particularly loud crack of thunder that seemed to emanate from directly above our home.

Happy Smiley Reassuring Daddy walks around the kitchen table so that he can close the adjacent window.

“Look, guys, I know that’s a scary sound, but there really isn’t anything to be afraid of,” he says as he reaches up and places his hands on the lower window sash. “Mommy and Daddy are right here with you, and we’re all perfectly s— 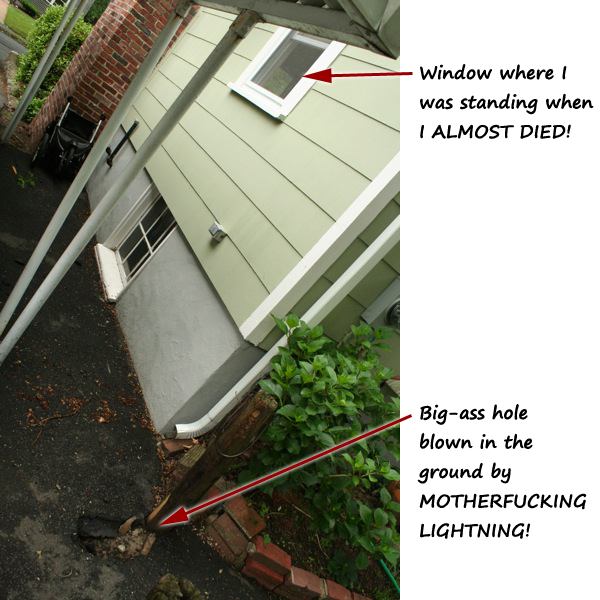 Let us survey the damage.

Needless to say, my credibility became suspect … and my daughter’s fear of thunderstorms was exponentially multiplied.

The extent of her post-traumatic stress became fully evident this summer, when a multi-night string of thunderstorms threw her into a multi-night state of panic about being alone in her bed. Suddenly, bedtime morphed from a pleasant little ritual to a 90-minute-long, screaming-and-crying-filled test of wills.

Strangely, she seemed unmoved by my assurances that it was just a loud noise, and that nothing bad could happen. It was as though she had an overwhelming reason to doubt me.