But, OK, look, we were talking about being inspired and having faith that America will rise from the ashes, and although everything that has happened during the far-too-lengthy delay between my previous entry and the piece you’re now reading has left me feeling nowhere near as pumped-up and optimistic as I was at the end of Part 1, we’re going to journey back to that amazing day I had in D.C. and see if we can recapture some of that inspiration and optimism, m’kay? Great. Let’s go.

Freshly showered and fueled up on the hotel’s breakfast buffet, I resumed my sightseeing at the Jefferson Memorial. 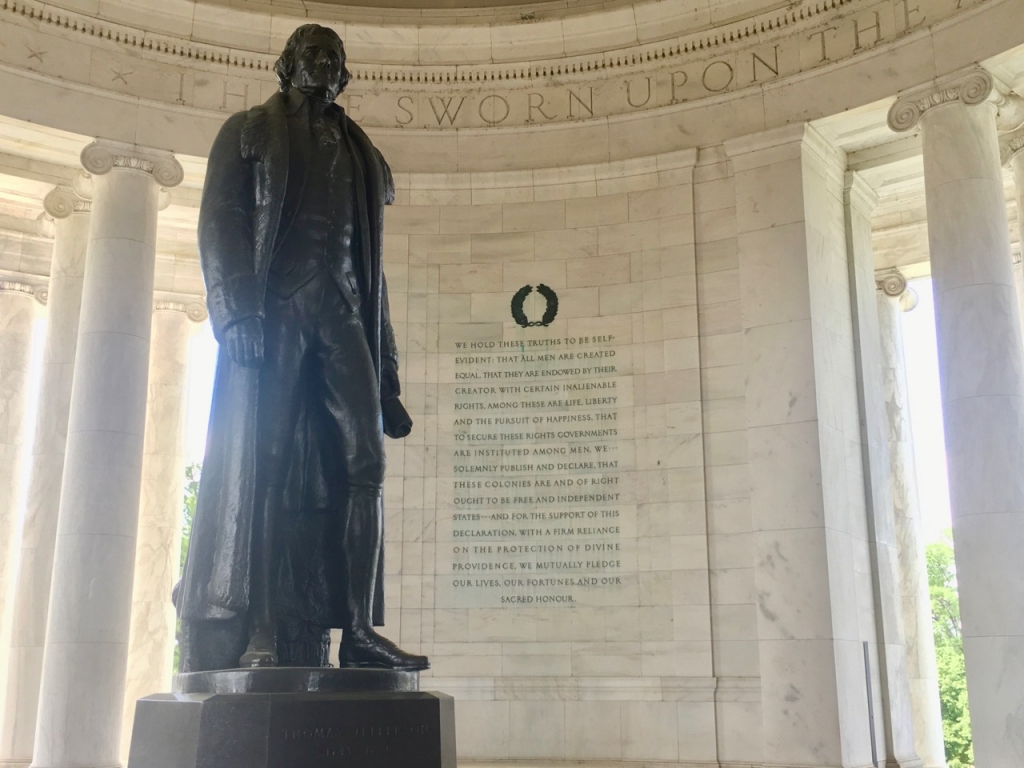 Displayed on the walls of the rotunda surrounding Jefferson’s statue are several quotes attributed to him … to include, of course, the opening words of the Declaration of Independence, which are visible in the photo above. Let us turn, however, to one of Jefferson’s lesser known quotes on display here and see if we can’t frame this journey through the lens of some of our present-day challenges and unfortunate realities. 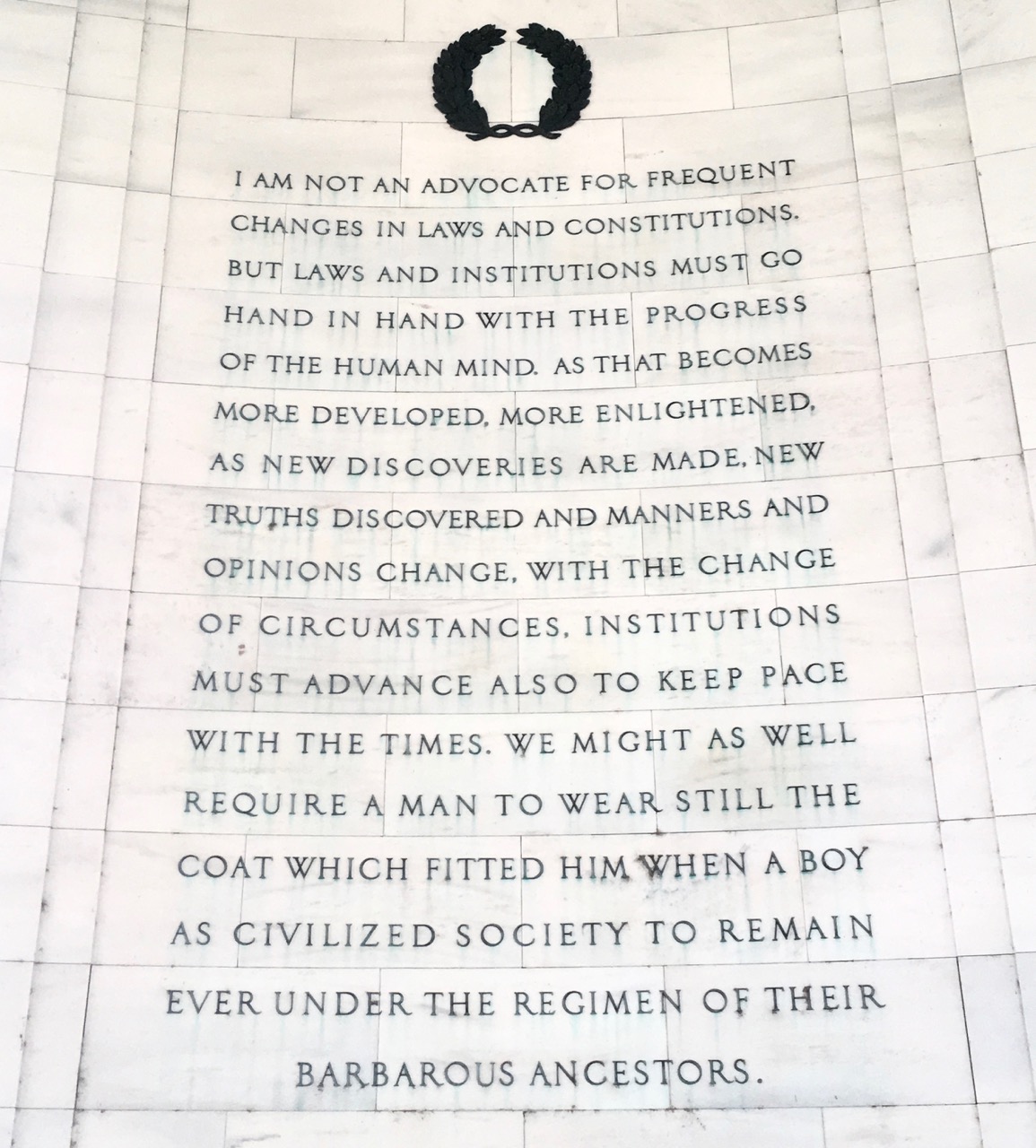 The above quote was excerpted from a letter Jefferson wrote in the year 1816. That same year, the United States Army adopted the Springfield Model 1816 Musket, a single-shot, muzzle-loading, flintlock rifle whose rate of fire under the best of conditions was two or three rounds per minute.

Last fall, a civilian fired 1,100 bullets into a crowd of concertgoers from his 32nd-floor hotel room, killing 59 people and injuring roughly 500 others. It took him 10 minutes to do so.

The 2nd Amendment, which overzealous gun owners and the Russian-infiltrated National Rifle Association use as a shield to ward off any suggestion of common-sense gun regulations, was ratified in the year 1791.

[W]ith the change of circumstances, institutions must advance also to keep pace with the times.”

Yeah, I’m with Jefferson on this one: A constitutional amendment written when single-shot muskets were considered state-of-the-art armament does not adequately address the oversight necessary for civilian access to the mass-casualty-inducing weapons of today, the likes of which defied imagination 227 years ago. To argue otherwise is willfully ignorant and intentionally detached from reality.

Alrighty, then. Now that we’ve finally solved America’s gun problem, let us continue to make our way around the Tidal Basin, where next we will encounter an enormous, sprawling, 7.5-acre memorial that honors President Franklin Delano Roosevelt. 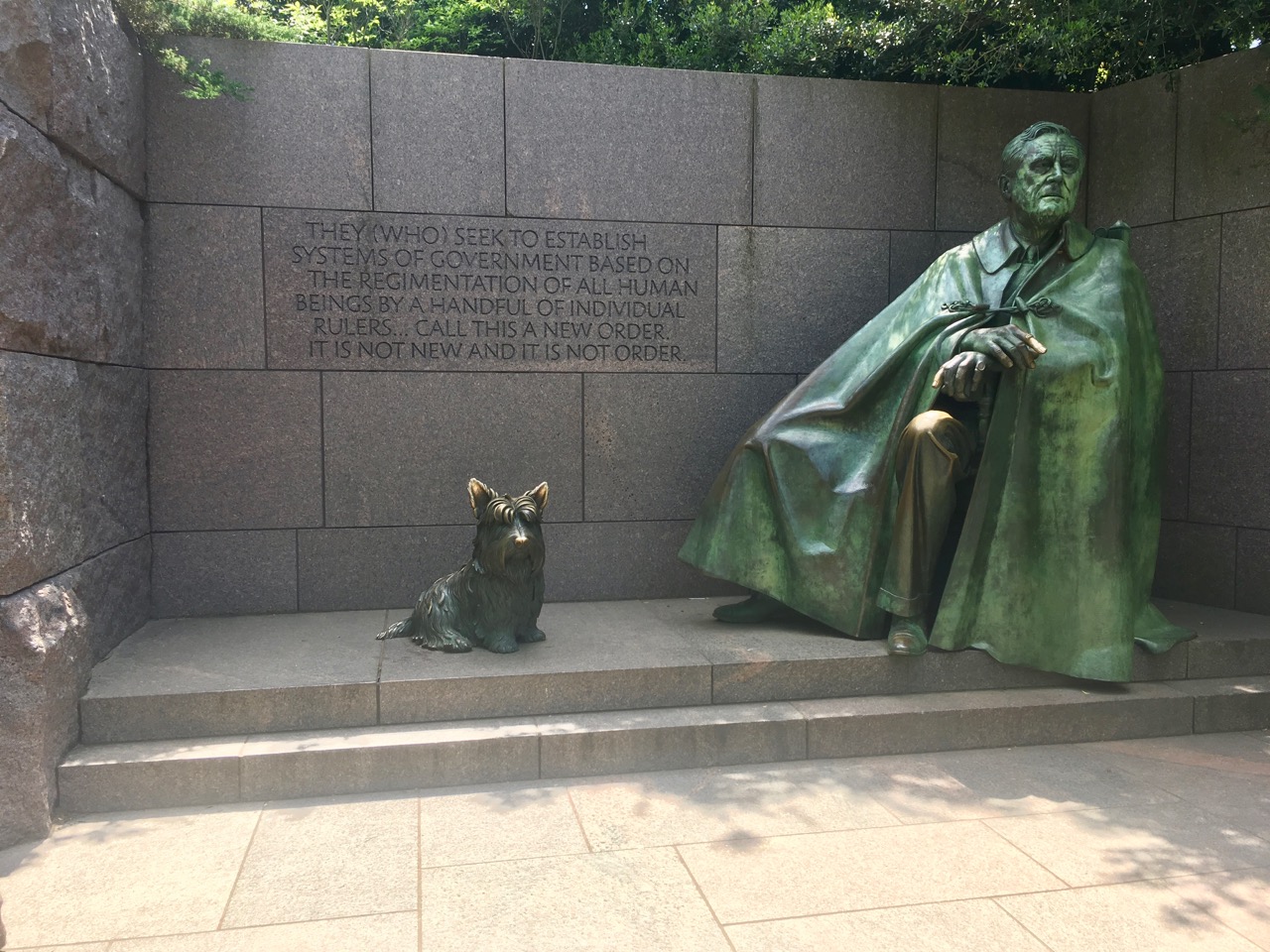 When Trump lies and whines about the supposed mess he inherited and then claims he is accomplishing more than any other president, please keep in mind that F.D.R. inherited the Great Depression, successfully led America to victory during World War II, and racked up a list of accomplishments that includes: the creation of Social Security; the establishment of a national minimum wage, guaranteed overtime, child-labor laws and the 40-hour work week; reducing unemployment from 25% to 2%; and co-founding the United Nations—you know, that critical group of allies that Trump has been destabilizing since taking office (which, not coincidentally, is something that, for years, has been on Vladimir Putin’s wish list).

In addition to the sheer quantity and scale of F.D.R.’s many accomplishments, you might also have noticed that the ones mentioned above comprise things beneficial to the majority of Americans, which places them in sharp contrast to Trump’s thus-far single-greatest legislative achievement: a $1.5 trillion tax cut, 82% of which goes to the wealthiest 1% of Americans.

Truth be told, I can make only the most tenuous of connections between the presidencies of Donald John Trump and Franklin Delano Roosevelt, so here goes: F.D.R. once declared that Dec. 7th, 1941—the day on which Japan attacked Pearl Harbor—was a date that would “live in infamy”; that same phrase also applies to the manner in which history will remember Trump’s presidency itself, the unfortunate existence of which is due in no small part to Russia’s attack on our democracy—an attack that Trump continues to deny even took place.

No, I do not see a 7.5-acre memorial in Trump’s future … unless, of course, that ends up being the footprint of the Donald J. Trump Presidential Penitentiary in which he’ll hopefully spend his final days.

And, hey, speaking of racism— What’s that? Well, no, we weren’t speaking specifically about racism just now, but we were speaking about the Trump presidency, so … same thing; the latter would not exist without the former—which makes particularly bittersweet the next stop on our sightseeing tour. 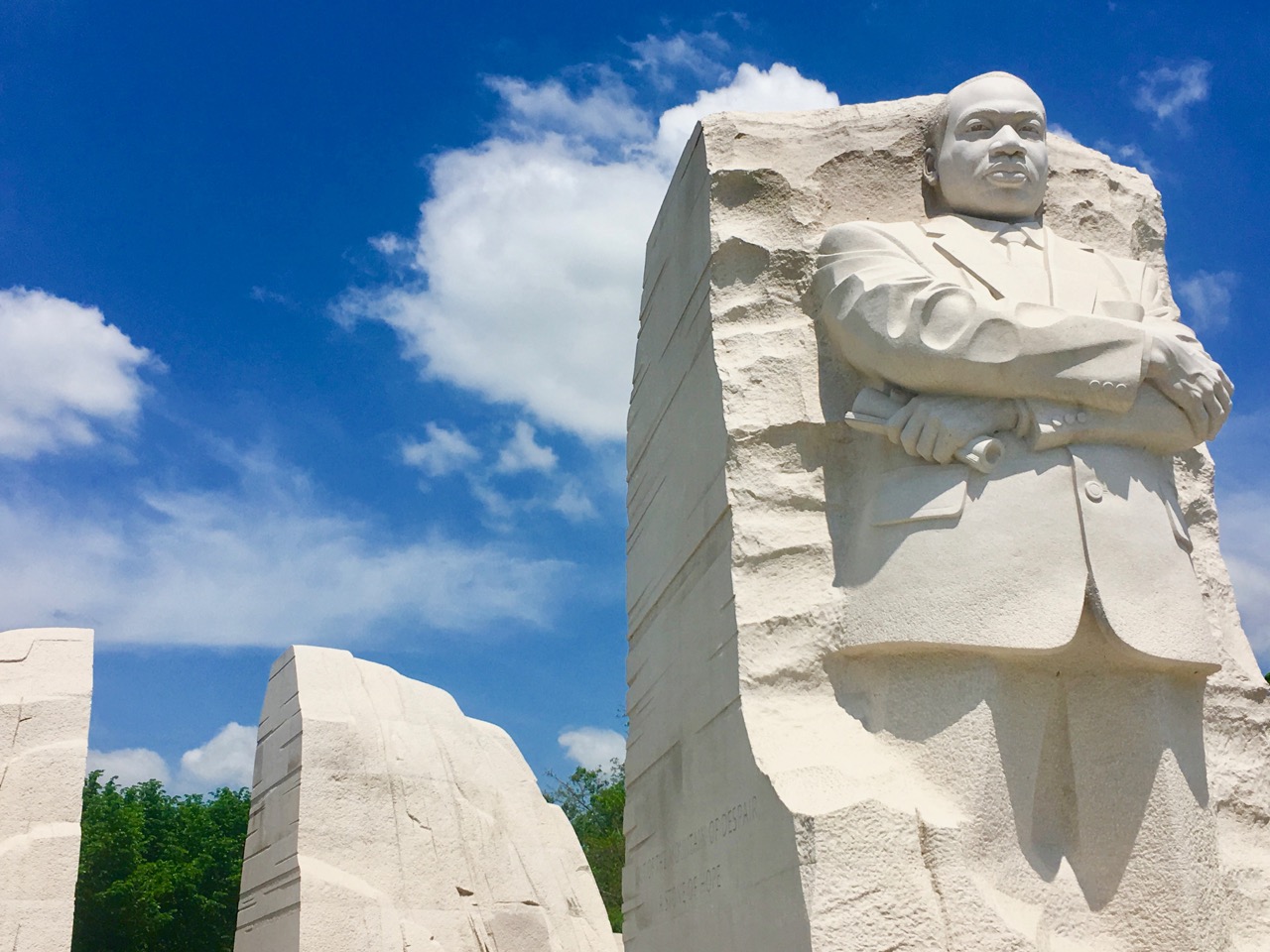 It is with no small degree of sorrow that my first visit to Martin Luther King Jr.’s breathtaking memorial should happen not during the tenure of President Obama, whose presidency itself seemed, at the time, to suggest that perhaps we, as a nation, were getting closer to achieving the dream of which King once spoke, but instead during the illegitimate occupation of the Oval Office by a blatantly racist vulgarian whose presidency makes clear that we still have a long way to go. It is not the first time I have regretted my actions, or lack thereof, during Barack Obama’s presidency, and I’m sure it won’t be the last.

My regret notwithstanding, let us look now at a couple of famous quotes etched into the walls that run along the perimeter of Dr. King’s memorial:

Injustice anywhere is a threat to justice everywhere. We are caught in an inescapable network of mutuality, tied in a single garment of destiny. Whatever affects one directly, affects all indirectly.”

This. This is what drives me crazy about the exclusionary, isolationist, I-got-mine-so-screw-everyone-else approach of the MAGA movement and the modern-day Republican party in general. The title of this Huffington Post essay sums it up quite nicely: I Don’t Know How To Explain To You That You Should Care About Other People. Why do some folks find it so difficult to wrap their heads around this concept?

The bad news: Other than those Trump devotees (like this woman, for example) who one day find themselves on the receiving end of the kind of misfortune they currently blame the less fortunate for somehow inflicting upon themselves, I do not believe anyone who still subscribes to Trump’s vision of the world will ever have the minimal amount of enlightenment and self-awareness required to realize that he is a monster, his party is garbage, and their collective policies are shortsighted at best, dangerous at worst, and stem from a wholly selfish and self-centered view of the world.

The good news (also etched into stone at the MLK memorial):

We shall overcome because the arc of the moral universe is long, but it bends toward justice.”

I believe Dr. King is correct. It is a too-slow process for my liking, and it is especially difficult to trust in that process at a time like this, when an ignorant, arrogant, minority segment of the population that has cheated its way into power is now doing its damnedest to bend that arc in the wrong direction, but the battle for progress always includes setbacks.

As dark as things are right now, I believe the light will prevail. Relative to the many ordeals through which our country has endured since its founding, the current crisis is merely a single, aberrant data point on a timeline spanning 242 years. Yes, it’s bad, and yes, repairing the damage that these ghouls currently are wreaking will require tremendous and sustained effort … but I believe that we, as a people, are up to the task. I believe there are more good folk than bad … and, moreover, I know what those who came before us have been willing to sacrifice in order to get us this far. 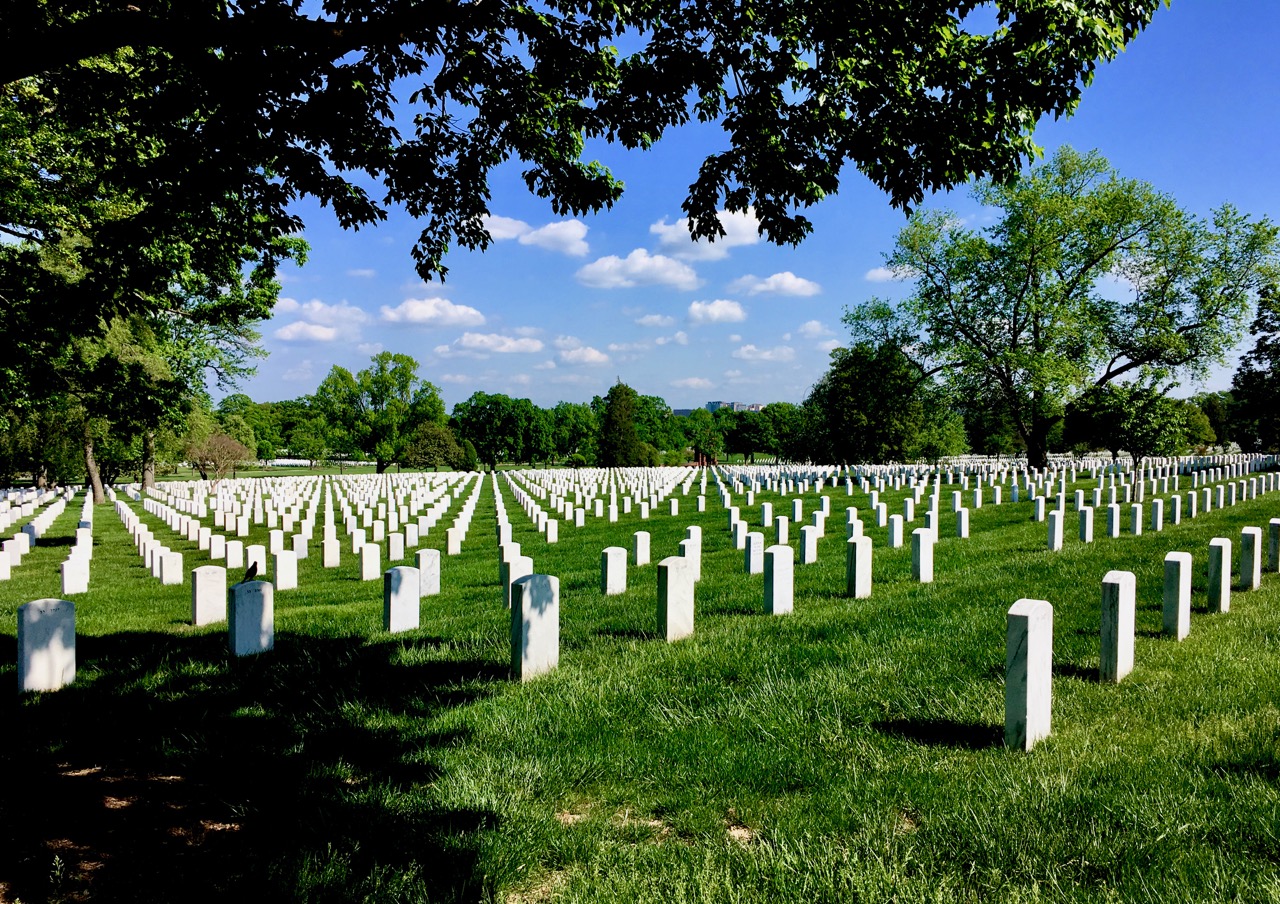 Arlington National Cemetery, the final stop on our day of sightseeing, is a somber, overwhelming, and gut-wrenching reminder of the sacrifices made by those who fought to preserve and protect the freedoms that our current power-hungry president and his subservient, greed-driven, disgraceful party seem intent upon eroding. It is up to us to stop them. We are tasked with staying informed, remaining actively involved in the political process, and showing up on election days. Compared to the sacrifices of the brave men and women who literally gave their lives for our right to do so, ours is a small price to pay.